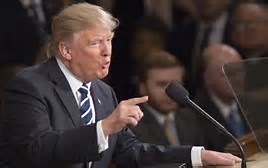 In an address to a joint session of Congress on Tuesday, President Donald Trump asked legislators to produce and pass a $1 trillion spending package meant to “launch a national rebuilding” of the country’s infrastructure, Trump said, including funds for rebuilding U.S. highways.
“[President Eisenhower] initiated the last truly great national infrastructure program, the building of the Interstate highway system. The time has come for a new program of national rebuilding,” Trump said. “Crumbling infrastructure will be replaced with new roads, bridges, tunnels, airports and railways, gleaming across our very, very beautiful land.”
Trump’s call for infrastructure investment came a day after he mentioned in a speech to the National Governors Association recently consulting with “a friend who is in the trucking business.”
“He said, my trucks are destroyed going from New York to Los Angeles. They’re destroyed,” Trump said Monday. “He always prided himself on buying the best equipment. He said, the roads are so bad that, by the time we make the journey from New York to Los Angeles or back, he said the equipment is just beat to hell. I said, when has it been like that before? He said, it’s never — he’s been in the business for 40 years — he said it’s never been like that.”
Tuesday’s address was Trump’s first to Congress since his inauguration as president. In most years, the speech would be referred to as the annual State of the Union address. However, presidential tradition dictates the speech only be dubbed the State of the Union if the president has been in office for a full year.
Trump in his address lamented U.S. spending abroad, “all while our infrastructure at home crumbled,” he said. “America has spent $6 trillion in the Middle East. With this $6 trillion, we could have rebuilt our country twice, and maybe even three times,” he said, referring to money spent on wars in Afghanistan and Iraq and subsequent reconstruction efforts in those countries.
However, unlike wartime spending in the Middle East, Trump’s infrastructure funding premise relies on enticing private investors to help reach the $1 trillion target. Trump said the investment would be split between “both public and private capital.”
Privately funded infrastructure projects could mean more tolls on U.S. roadways, especially near urban centers, where traffic volume makes it easier for private companies to recoup their investment and earn profits.
Talk of big spending on infrastructure was revived by Trump this week after mentioning it little in the first six weeks of his presidency. Trump promised during his campaign a $1 trillion investment into the country’s transportation infrastructure if elected.
In a speech to the National Governors Association on Monday, Trump circled the issue, telling the country’s governors “it’s not like we have a choice” on infrastructure spending. “It’s not like, oh gee, let’s hold it off. Our highways, our bridges are unsafe,” he said.