By Kevin Jones in Running Lights Blog, AmericanTrucker.com, May 8, 2017 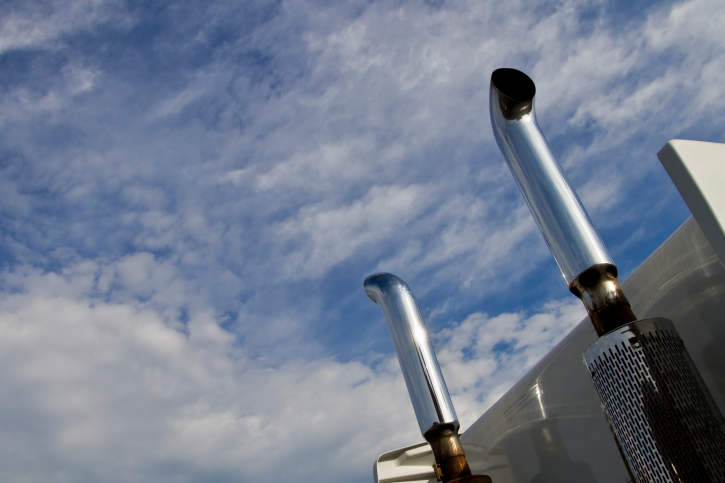 Even as truck makers and some of their biggest customers gathered to review—and praise—the latest and greatest in environmentally friendly technologies last week, others in trucking were petitioning the Trump administration to reconsider the fundamental premise that allowed the Obama EPA to regulate greenhouse gases (GHG) in heavy-duty vehicles. This comes as the new leadership at EPA has asked for additional time to review a pending appeal of a federal waiver that allows California to establish its own standards for diesel emissions.
The gist, as explained by Joe Rajkovacz, director of governmental affairs and communications for the Western States Trucking Assn., is that the petitioners object to the “forward-pushing mandates” imposed by EPA.
“We don’t have a quarrel with somebody who wants to pay the money to advance a technology standard,” he says. “But to have EPA—and by extension, the California Air Resources Board—force feeding these mandates onto the trucking industry, we consider an abuse of power.”
The petition, filed by the Texas Public Policy Foundation on behalf of a range of trucking, construction, and agricultural interests, focuses on EPA’s Greenhouse Gas Endangerment Finding, calling it “the cornerstone” of EPA’s effort to regulate greenhouse gases under the Clean Air Act.
And because carbon dioxide (CO2) is the most prevalent greenhouse gas, “the Endangerment Finding provides EPA with a springboard for regulating virtually every aspect of our nation’s economic life,” it reads. “At the same time, it is the product of serious legal, scientific, evidentiary, and procedural errors. Those errors reflect the past Administration’s rush to judgment, which was spurred by political expediency.”
President Trump campaigned on a promise to undo federal regulations that are harmful to business, and EPA has been a top target. Indeed, over the weekend half of the members of a scientific review board were told their terms would not be renewed, clearing room for business and industry representatives to replace the academics.
But given the pressure on EPA, CARB is “doubling down,” Rajkovacz suggests.
“They view themselves as some sort of heroes, the center of the resistance,” he says. “But they are not as independent as they would like to project. They are not an agency that can wave a magic wand and regulate as it sees fit without the approval of the federal government.”
Indeed, the same petitioners also have a lawsuit pending in the U.S. Court of Appeals for the Ninth Circuit, challenging EPA’s granting California an authorization under the federal Clean Air Act section to adopt and enforce its off-road diesel regulations. Oral arguments are scheduled for May 18, but EPA last week moved for a continuance.
“In light of the recent change in Administration, EPA requests continuance of the oral argument to give the appropriate officials adequate time to fully review the Off-Road Diesel Decision,” the motion states. CARB opposes the motion.
Rajkovacz says those who’ve been fighting CARB now have reason to be hopeful, at least.
“It gives us a sense of optimism, regardless of what the Schneiders and J.B. Hunts are saying in their Kumbaya moment in Long Beach [at ACT Expo]. There’s bunch of us that have no problem with your implementing [these goals for] yourself, but we have a real problem with your supporting and imposing mandates on everyone else,” Rajkovacz says. “There are significant other players in this industry that believe this government overreach by environmental zealots needs to end. We’re thinking we might have a pretty good chance.”