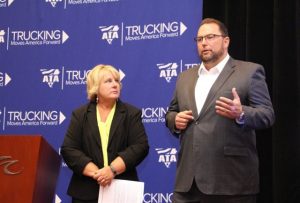 LAS VEGAS — The American Transportation Research Institute unveiled its top industry issues report showing that the looming implementation of the ELD Mandate is the top concern of carriers and drivers.
The annual survey, which generated more than 3,200 responses from motor carriers and commercial drivers, was released at the American Trucking Associations 2016 Management Conference and Exhibition meeting in Las Vegas, Nevada. In addition to ranking the trucking industry’s top concerns, the report also includes prioritized strategies for addressing each issue.
“The results of ATRI’s survey reflect what I’ve heard from carriers and drivers as I’ve traveled the country this year on behalf of ATA,” said Pat Thomas ATA chairman and senior vice president for state government affairs at UPS. “The ever-increasing regulatory burdens placed on the industry, coupled with the sluggish economy, are creating challenges for trucking as we work hard to keep America moving forward.”
More than 65% of respondents were concerned about productivity impacts the industry could experience from fully mandated ELD deployment. Dropping from its top ranking the past three years, Hours-of-Service stayed near the top of the list due to ongoing uncertainty of a final HOS rule.
Ranking third in ATRI’s report was the cumulative economic impacts of trucking regulations, which ATRI says reflects the industry’s collective frustration with increasing and costly regulatory requirements. The lack of available truck parking moved the issue up again this year to fourth overall and the state of the nation’s economy rounds out the top five industry concerns.
“Knowing what the industry is concerned about, and what strategies it views as most promising for addressing each issue, allows ATA and its Federation partners in the states to better focus our collective efforts on behalf of motor carriers and their employees,” said Chris Spear, ATA president and CEO. “The ATRI survey results provide the roadmap we need to put wins on the board for this industry and the nation’s economy as a whole.”
A copy of the survey results is available from ATRI at www.atri-online.org.