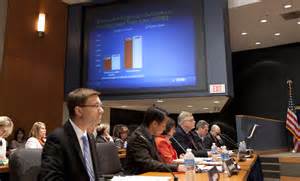 The U.S. Senate voted late Tuesday to send a dozen Senators to meet with 28 members from the U.S. House to try to hammer out a reconciled highway bill that resolves differences between the two chambers’ separate surface transportation funding and regulatory packages.
The House voted last week to set up the conference committee and on the 28 representatives — 16 Republicans and 12 Democrats — to represent the lower chamber.
If the conferees can produce a unified bill, it must be sent back to each chamber for passage before being sent to the White House for President Obama’s signature. The conference committee is on the clock, however. Current highway funding authorization expires Nov. 20. If the committee cannot produced a new bill by then, Congress may have to pass another short-term measure to ensure the Highway Trust Fund doesn’t go belly up.
Entering the conference, both bills contain a few major trucking regulatory changes, highlighted by lawmakers’ direction to FMCSA to remove CSA scores from public view and to develop and implement a plan to fix the program’s faults before making the scores live again. The bills also would change driver drug testing rules to allow carriers to drug test drivers via hair test only and establish a pilot program for under-21 CDL holders to operate interstate. Click here to read more on the Senate version of the bill and here to read more on the House’s. Of key trucking interests on the table heading into the conference committee are potential inclusions of size and weight changes and, perhaps more pressing for small carriers, fixing language in the bill that could potentially create havoc for about 450,000 carriers, many of them small fleets and owner-operators. Sources have told CCJ that letters went out Nov. 11 to members of the House and Senate conference committee containing the signatures of a coalition of businesses and groups (including representatives from Apex Capital, the Western States Trucking Association, the National Association of Small Trucking Companies and six others) asking lawmakers to clarify the “Interim Hiring Standard” provision included in the House version of the bill.
The “hiring standard” is intended to establish clarity on what brokers/shippers and other carrier-contracting entities need to do to avoid what those entities see as a rash of “negligent selection” lawsuits that rely on flawed CSA Safety Measurement System methodology.
Many feel that standard is written in a manner, however, that could discourage business for the large number of Unrated and Conditional-rated carriers, which together make up a vast majority of registered motor carriers. As CCJ reported this week, nearly half a million carriers could be impacted by the language as-is.