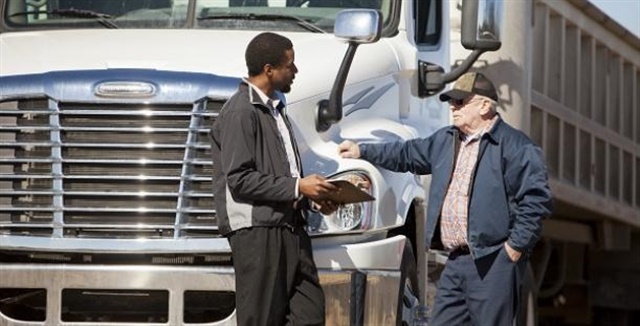 With just a week to go until the much debated electronic logging device rule kicks in on Dec. 18, Heavy Duty Trucking asked top officials of two trucking associations that have been outspoken in their support or criticism of the far-reaching mandate to weigh in on several key aspects.
Replying for the Owner-Operator Independent Drivers Association is Todd Spencer, executive vice president of the group that has represented the interests of individual professional truckers for over 40 years.
Replying for the Alliance for Driver Safety & Security, also known as the Trucking Alliance, is Lane Kidd, managing director of the coalition of freight and logistics companies that supports various safety and security reforms.
Neither party was privy to the replies of the other before this article was posted.
HDT: Will ELDs truly stop cheating on hours of service?
Kidd: Yes, ELDs will effectively catch commercial drivers who ignore federal hours-of-service rules. And any driver who thinks he’s smart enough to simply manipulate the software is in for a rude awakening. Paper log books are like a horse and buggy, while an ELD is a Maserati, and you’ll not be able to simply alter the technology. But it begs the question – why would a company or driver go to such trouble to cheat, when ELDs will improve his lifestyle, his work day, and his pay.
Spencer: Not likely. The only thing an ELD can do is tell if a vehicle is moving. People are creative. Technology can always be tweaked for a different outcome. With ELDs, a driver can easily log off when [the vehicle is] stuck in traffic – something you would never do with paper.
HDT: If you could emphasize the single most important reason you’re for or against ELDs, what would it be?
Spencer: While the government-required monitoring and tracking should be a broadly shared concern, and drivers do say ELDs are used to prod and push, we are not opposed to ELDs per se – simply the mandate and associated costs not justified by improved efficiency or any credible safety data.
Kidd: ELDs will save lives. Trucking companies and their drivers have a moral and ethical responsibility to protect the general public. A motorist should be assured that the truck driver operating that semi within a few feet of his car is properly rested, drug- and alcohol-free, well-trained, and complying with the law. Consider there are 400,000 accidents, 115,000 injuries, and more than 4,200 deaths that occur each year on our industry’s watch. Who is at fault in those large truck crashes is not the issue. Drivers must be prepared and equipped with technologies to avoid those crashes, and ELDs are a significant tool to achieve that objective. ELDs can help verify that our drivers are well rested and not fatigued from too many hours behind the wheel.
HDT: Given there are widely stated issues around enforcement, why or why not should the rule’s implementation be delayed… even at this late date?
Kidd: The only industry segments crying for more time are those companies that want to avoid the law. Congress passed the ELD mandate in 2012, and trucking companies have had more than two years since the rulemaking to install a device. Our law enforcement officers have the tools to enforce the mandate now. For example, I witnessed a “go live” demonstration in Virginia last week between carriers, truck drivers, the U.S. DOT and Virginia State Police. The officer stood on the truck’s running board while the driver transferred his ELD data to the officer’s laptop. The officer uploaded the data from his laptop using the web to the U.S. DOT platform. Within the time you could place an order through a drive thru, the officer received the information back from U.S. DOT as to whether the driver was in compliance. One officer commented to me that what takes him at least an hour to do in a roadside compliance check will take about five minutes with ELDs. ELDs are the game changer.
Spencer: There is way too much confusion across the board. State enforcement officials are all over the place on what to enforce on which trucks and drivers, and may not even have the backing of their own state laws, [or know] which trucks and operations are exempt. While you can point to FMCSA for the tardiness of their just-in-time training, I don’t think they ever imagined how broadly this rule could be applied and how many crucial sectors of our economy use and depend upon trucks.
HDT: Do you think ELD suppliers should have raised the alarm months ago about the lack of government or third-party certification of the devices they say comply with the rule?
Kidd: Our smart phones don’t have a third-party certification. I buy a flat screen based on my faith in the brand. Why should an ELD be any different? If the ELD doesn’t work, people won’t buy it. That’s the way an open market works. Carriers and drivers should do their homework and study which ELDs are receiving the highest marks and reviews. The best ELD companies will survive. And you won’t have ELDs that easily allow drivers to alter the programming, because the honest players won’t let that happen. The Federal Motor Carrier Safety Administration did the best it could to develop a self-certification system, because Congress didn’t give the agency enough time to do it any other way. Most importantly, improving safety shouldn’t bog down in bureaucracy.
Spencer: It’s been buyer beware from the start.