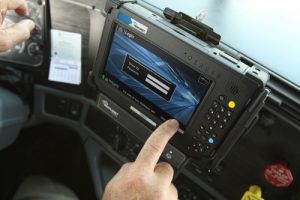 A federal rule to require truck operators to use electronic logging devices to keep records of duty status has cleared the White House’s Office of Management and Budget, clearing the way for the rule to be published in the Federal Register. This is the final version of the rule, and it will take effect two years after its publication, giving carriers and owner-operators a two-year window to comply with the rule’s requirements. The proposed version of the rule was published last March, calling for all drivers currently required to keep paper records of duty status to fall under the rule’s ELD requirement.
In addition to requiring the installation and use of the devices, the rule will also spell out the minimum hardware and software requirements for the devices. The rule also outlines several provisions to try to prevent the devices from being used to harass drivers, such as carriers messaging drivers during off-duty time and limits on location tracking. Click here to read more on CCJ’s coverage of the proposed harassment prevention language within the rule. The OMB’s clearance of the rule comes just three days after its clearance of a rule that would impose expensive fines on carriers, shippers and brokers who pressure drivers to break federal safety rules, like hours-of-service regulations. The DOT in its November monthly regulatory report projected the ELD rule to be published Nov. 30. However, the rule cleared the OMB a few days earlier than the DOT projected, so it’s unclear whether that will change the publication date.