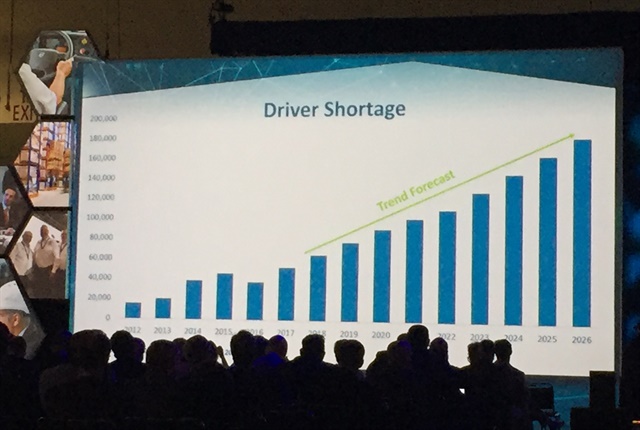 “We experienced a ‘freight recession,’ last year, which eased the pressure on the driver market,” Costello said. “Now that freight volumes accelerating again, we should expect to see a significant tightening of the driver market.”

Driver turnover at large truckload fleets, which hit an all time high of 130% in 2005, averaged 81% last year with the freight slowdown. But by the second half of this year, it was back up to 90%, Costello noted.

While 50,000 is an all time high for the industry, he said, it feels even worse. “There’s quality vs. quantity. This is where the shortage feels much worse.”

Derek Leathers, president and CEO of Werner Enterprises, explained, “The real issue I think we’re all faced with is the quality driver shortage. The ability to find drivers who meet the quality expectations we all have. This summer we crested 100,000 applications for the year. The problem was the hire rate in terms of meeting quality criteria was 2.7%.”

Costello detailed the causes of the shortage in the report, including the demographics of the aging driver population, lifestyle issues, regulatory challenges and others; as well as possible solutions.

Demographics is a big part of the problem. ATA’s research arm, the American Transportation Research Institute, recently updated its demographic data on drivers and found some 57% of drivers are 45 or older. Only 4.4% are 20-24 years old, noted Rebecca Brewster, president and COO of ATRI.

“These demographics are daunting,” Leathers said. “I’m happy to report ours have moved about 10 years to the left, thanks to the focus we’ve put on bringing more young people in.”

“While the shortage is a persistent issue in our industry, motor carriers are constantly working to address it,” Costello said. “We already see fleets raising pay and offering other incentives to attract drivers. Fleets are also doing more to improve the lifestyle and image of the truck driver, but there are also policy changes like reducing the driver age as part of a graduated licensing system, or easing the transition for returning veterans, that can make getting into this industry easier and therefore help with the shortage.”

This led to a discussion of ATRI’s efforts to develop a younger driver assessment tool. The idea is to look at the characteristics of some of the industry’s best drivers and look at things such as personality traits, health, risk tolerance, age, attitudes regarding safety, and cognitive ability, and try to find younger candidates with similar traits.

“As we thread this needle as an industry,” Leathers said, “we’re going to have to bend over backwards to address every safety concern and some we probably haven’t thought of.”

Brewster noted that a new data point added to ATRI’s industry metrics this year was more granular data on incentives and bonuses. The average bonus safety bonus per driver was $1,499, the average on-time delivery bonus was $1.946, with an average $949 starting bonus and $1,143 retention bonus.”

Leathers mused, “Do these reflect what we stand for? In my mind what we ought to be doing is paying the folks in the truck in our fleet today and taking care of them every way we can. Put the money with the person who’s already proven they can do it,” rather than large sign on bonuses. “It’s nice to see more emphasis on safety, on-time and retention bonuses.”