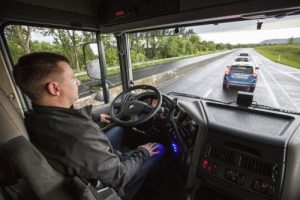 The U.S. Department of Transportation issued Sept. 20 regulatory framework for vehicle manufacturers, state regulators and other stakeholders regarding the development and deployment of autonomous cars and trucks. The proposed policy initiative comes as both traditional automotive makers and tech giants march increasingly closer to readying such technology for public use.
The 114-page document, which the DOT is accepting public comment on for 60 days, intends to set safety standards for companies developing self-driving vehicles and to establish a unified national policy on vehicle automation. DOT says its Federal Automated Vehicles Policy was developed to help hasten the development of autonomous vehicles while also addressing safety issues “at the front-end of development,” DOT says.
The proposed guidelines set a 15-point safety assessment, which requires autonomous vehicle manufacturers to submit a notice to the DOT stating their autonomous vehicles meet certain specifications regarding crashworthiness, individual privacy, cybersecurity, safety systems, privacy, data recording, ethics and more.
“There are huge upsides and significant challenges that come with automated vehicle technology, and we will continue the conversation with the public over the coming months and years as this technology develops,” said DOT Secretary Anthony Foxx in an address announcing the policy proposal. “Automated vehicles have the potential to save thousands of lives, driving the single biggest leap in road safety that our country has ever taken.”
The DOT noted in its announcement that more than 35,000 people were killed in the U.S. in car crashes last year, and more than 94 percent of the crashes were caused by “a human choice or error,” says Mark Rosekind, head of the DOT’s National Highway Traffic Safety Administration. Autonomous vehicle deployment could dramatically reduce those numbers, the DOT says.
DOT and NHTSA will be accepting public comment on its proposal for 60 days following the proposal’s publication in the Federal Register, likely this week. CCJ will publish a link to the regulations.gov rulemaking portal once the proposal is officially published.
In addition to the safety assessments established by the policy, the DOT also set roles relative to autonomous vehicles for federal and state governments. The federal government will retain control over setting vehicle standards and enforcing compliance with such standards, along with managing recalls.
States will, similar to their duties with non-autonomous vehicles, be responsible for licensing drivers and registering vehicles, establishing and enforcing traffic laws, conduct inspections and regulate vehicle insurance.