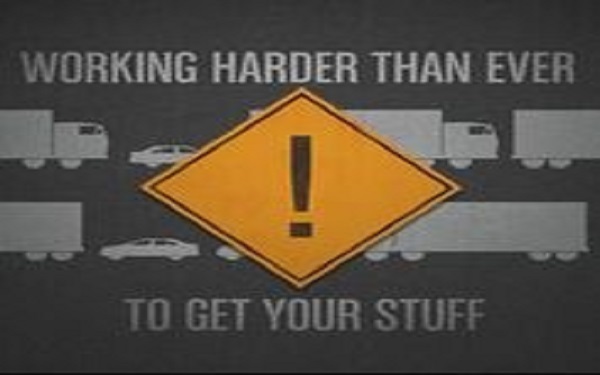 If the U.S. trucking industry were to shut down for a mere five days, it would result in a depletion of food, drinking water, medicine, fuel and other daily necessities. Airports would close, trash would pile up, industrial production would stop, public transit would end and our daily lives would come to a complete halt.
The reality of this debilitating scenario is explored in “Be Prepared to Stop,” a documentary film about the failing U.S. highway system and challenges faced by the freight transportation industry.
“Be Prepared to Stop” debuts on Amazon and iTunes March 30. More information and trailers are available at BePreparedToStop.org.
“Be Prepared to Stop” is a documentary about our love of and absolute dependence on the great American highway. We rely on those roads and the big rigs rolling down them to supply us with just about everything we use every day. But this round-the-clock lifeline has become so entrenched in our daily routines, we don’t even notice it anymore.
Now that neglect is reaching a crisis point. Roads and bridges are failing, safety concerns are mounting, skilled drivers are retiring and government action is at a standstill.
“Be Prepared to Stop” raises awareness about the impact of this impending breakdown and how it will obstruct the U.S. economy and adversely affect the daily lives of all Americans.
“My grandfather was a truck driver and taught me to respect the professionals driving the rigs hauling everything we rely upon for our way of life,” said Jennifer Clymer, co-director and executive producer of the film. “I am incredibly alarmed about the poor state of our highway system and the lack of understanding about how dependent we are on the freight transportation industry. I don’t think the average person knows just how much we rely on the movement of goods and commodities and how fast this country would shut down if that were in any way impinged upon. I am hoping this film sheds a light on this problem and is a wake-up call that if action is not taken soon there will be significant consequences.”
Co-director and producer Marijane Miller adds, “I was initially drawn to this because I found it hard to believe our highways were in such poor condition and the freight transportation industry was struggling to keep our economy moving. I soon realized most of us don’t know anything about the lifeline that keeps us fed and clothed. How we get the things we need every day is more important — and more personal — than most people understand.”
A few facts:
-Thirty-two percent of America’s major roads are in poor or mediocre condition and 25 percent of bridges are structurally deficient or functionally obsolete. $146 billion in capital investment would be needed on an annual basis over the next 20 years to significantly improve conditions.
-Forty-two percent of America’s major urban highways are congested, costing the economy an estimated $101 billion in wasted time and fuel annually.
-The trucking industry hauls 10.49 billion tons of freight every year, or 70.1 percent of total U.S. freight tonnage. Rail is next, moving 13.8 percent of the nation’s freight tonnage.
-All goods carried by ship, airplane or train reach their final destination by truck. More than 80 percent of U.S. communities depend solely on trucking for delivery of their goods and commodities.
-One out of every 14 jobs in the United States is created or directly affected by the trucking industry.
-Fifty-four million tons of freight move across the nation every day. By 2040 that will increase more than 40 percent.
More information is available at BePreparedToStop.org.