By Kevin Jones, Trucker.com, January 30, 2017
The potential for autonomous trucks to disrupt freight transportation—or at least the recognition, by carriers and shippers, of that possibility—has surged in the past year, according to an updated survey by Princeton Consultants. But the industry still might not fully appreciate the changes that are coming.
“Our firm believes self-driving trucks are going to get here faster and have more impact than the survey results [showed],” Princeton Consultants CEO Steve Sashihara said, and he cited a load of freight delivered recently by a sensor-driven truck in Colorado. “It’s no longer crazy white cars driving around cities; it’s starting to really happen. … There’s some amazing, smart engineers working on this. On the highways, the technology is already here.”
As for adoption by the trucking industry, there’s a “solid” business case based around the salary expense and hours limitations of human truck drivers, he explained, speaking in a Stifel Capital Markets conference call Friday.
Princeton projects implementation of self-driving truck technology in three phases:
1.Truck autopilot, assisting a traditional driver who’s still in the seat—variations of which are currently being tested on U.S. highways;
2.Linehaul driverless, for on-highway freight moves (perhaps in pelotons) and with first/last mile conventional drayage—“think of this as the new intermodal,” Sashihara said.
3.Door-to-door driverless, but not before the public believes the technology is safer than human drivers.
And while that full, Level 5 autonomy is still some time in the future, the public is rapidly being won over by the rollout of self-driving passenger vehicles, Sashihara added.
“When most people are trying to imagine this, [full autonomy] is where they’re getting hung up. They’re saying ‘have you ever seen a truck back into a dock, or how many docks there are in a crowded city—can a robot really do that?’” he said. “The nice thing about step 2 is you don’t have to worry about that—it’s the long-haul up and down the highways in pelotons; and the peloton itself may save 15% in fuel.”
In last year’s survey, Princeton found that only 28% of respondents believed self-driving trucks would have a moderate or large impact, compared to 40% in the latest survey. The number who said there would be “no real impact” fell from 24% to 19% this year.
As business advisors, Princeton is recommending carrier executives take a wait-and-see approach when it comes to self-driving vehicles and drones, both in terms regulations and the rapidly evolving equipment itself. 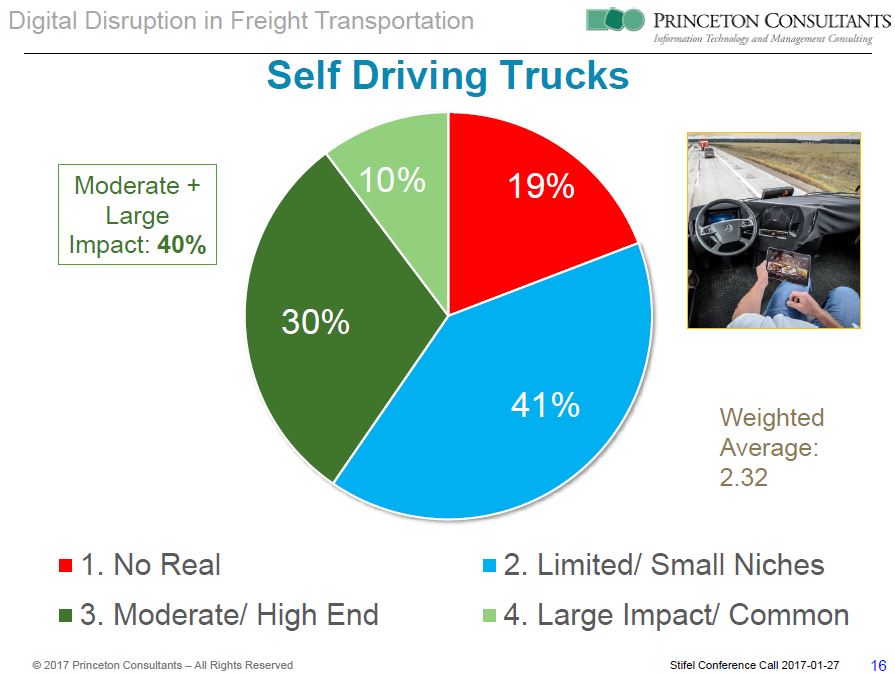 But Sashihara also discussed the disruptive potential of “Uber for freight,” or “radical disintermediation” of the freight transportation market. With 57% of the survey respondents anticipating a moderate to large impact, the sentiment was basically unchanged from a year ago.
“I don’t think we can sit back and just wait for things to happen, but that doesn’t mean we should create our own Uber-like channels. Whether we are a buyer of freight, a seller, or an intermediary, we have to improve our user friendliness and automation,” he said. “It’s undeniable that like Amazon really did to retailing, Uber really disrupted taxis—and that’s not such a big leap from taxi to commercial freight.”
The takeaway: Easy access to real-time market data and the ability to quickly tender a load and get a price is the direction freight transportation is heading. Still, cross-country freight moves are a lot more complicated than carrying a passenger across town—and that’s why Sashihara suggests change will more likely come from within the industry than from an outsider. 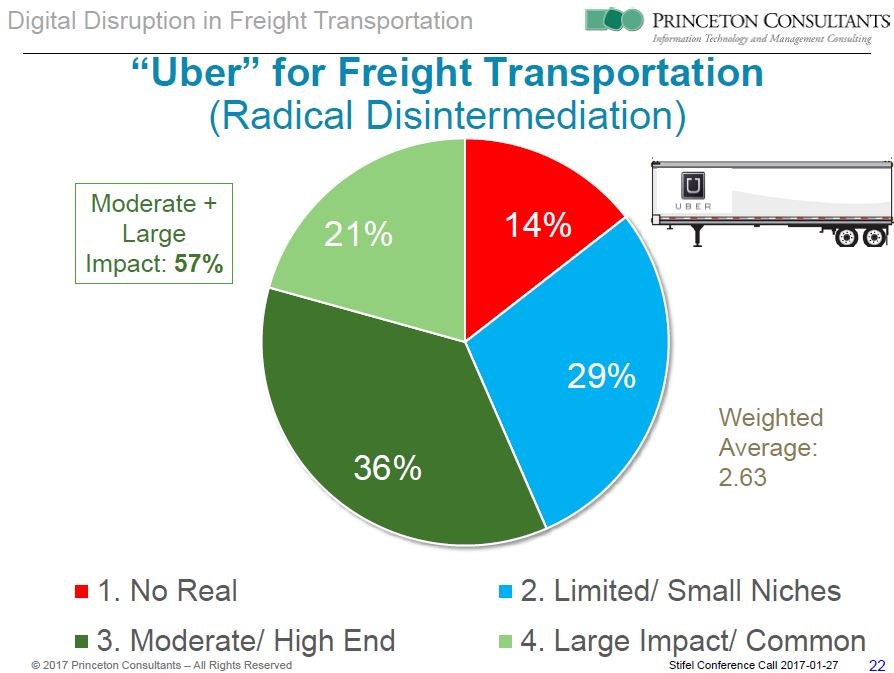 “There’s a lot moving parts and non-obvious stuff, so it’s hard to think that a couple of people will graduate from Berkeley and disrupt the trucking industry,” he said. “There’s a lot of inefficiencies in our marketplace, but I think it will be someone who is more of an insider who will say, ‘how can we think bigger than most and come up with some disruptive ways of really moving the needle?’”