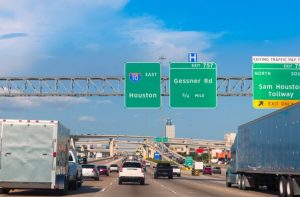 New data released today by the United States Department of Transportation’s Federal Highway Administration show that Americans drove 3.148 trillion miles in 2015, beating the previous record of 3.003 trillion miles in 2007. For a sense of scale, 3.148 trillion miles is roughly the same distance as 337 round trips from Earth to Pluto.
The new data, published in FHWA’s latest “Traffic Volume Trends” report – a monthly estimate of U.S. road travel – show that more than 264.2 billion miles were driven in December alone, highlighting the growing demands facing the nation’s roads and reaffirming the value of the recently enacted “Fixing America’s Surface Transportation” Act, which is investing $305 billion in America’s surface transportation infrastructure, including $226 billion for roads and bridges, over the next five years.
The December 2015 report also includes seasonally adjusted data, which is conducted by USDOT’s Bureau of Transportation Statistics as a way to even out seasonal variation in travel and enable VMT comparisons with any other month in any year.
The seasonally adjusted vehicle miles traveled for December 2015 were 268.5 billion miles, a new monthly record for seasonally adjusted VMT. December VMT increased by 4 percent compared to the previous December and by 1.4 percent compared with seasonally adjusted November 2015 figures. The estimates include passenger vehicle, bus and truck travel. December seasonally adjusted road travel reached a new high, showing that even when adjusting for holiday travel on both a year-to-year and month-to-month basis, road travel has achieved a new record level.
In December, U.S. drivers increased total mileage among all five regions of the United States. Traffic in the West, a 13-state region including Alaska and Hawaii, led the nation with 61.6 billion unadjusted VMT. With only 38.7 billion unadjusted VMT, the Northeast, a nine-state area stretching from Pennsylvania to Maine, had the least.
At 11.3 percent, California led the nation with the largest unadjusted single-state traffic percent increase compared to the same month a year earlier, followed by Hawaii at 7.2 percent and Arkansas at 6.2 percent. At 4.6 percent, Washington, D.C., had the largest unadjusted traffic single-month decrease.
The new figures confirm the trends identified in “Beyond Traffic,” a USDOT report issued last year, which projects a 43 percent increase in commercial truck shipments and population growth of 70 million by 2045. Our current infrastructure has ever increasing demands on it, and investments are needed in both the short and long term. Increased gridlock nationwide can be expected unless these investments are made.
Source: Federal   Highway Administration