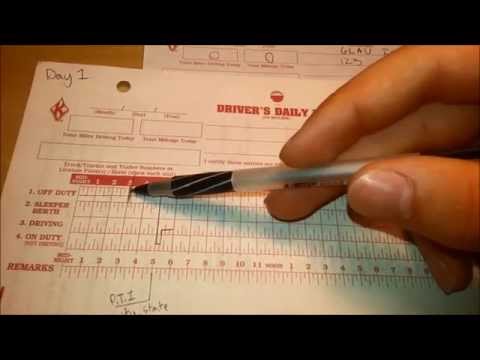 The countdown toward mandated Electronic Logging Devices (ELD’s) in the U.S. is now measured in terms of days. As of December 18, anyone who has been using paper logbooks south of the border will have to embrace a new reality – and a tool that monitors Hours of Service from the perspective of an unblinking digital eye.
“Hours of Service hasn’t changed,” stressed Joe DeLorenzo, director – office of enforcement and compliance at the Federal Motor Carrier Safety Administration (FMCSA), during a presentation at the American Trucking Associations’ annual meeting. But requirements around the way workdays are tracked clearly will change.
Once deadline day arrives, U.S. enforcement teams will begin to issue violations, warnings, and citations to those who run afoul of the new requirement for ELD’s. Out-of-Service penalties will be added to the list of potential sanctions on April 1, 2018.
Some states have yet to complete the underlying ­legislation needed to introduce the mandate, but they will be ready come December 18, says Collin Mooney, executive director of the Commercial Vehicle Safety Alliance (CVSA) that guides enforcement teams across North America.
DeLorenzo says the FMCSA won’t be concerned by one violation in a day, perhaps someone driving 15 extra minutes here or there, but multiple violations will trigger compliance reviews. Despite what some people believe, there is no official allowance for any “wiggle room” with paper-based logs, either.
Legal and legislative ­challenges by groups such as the Owner-Operator Independent Drivers Association to stall or ­outright kill the mandate, barring any changes that ­happen when the ink is still wet on the page of this ­magazine, have failed.
“This issue has been ­legislated, promulgated, and litigated,” American Trucking Associations Chief Executive Officer Chris Spear said in his annual address to ­members. “It is now time to move ­forward.”
Canada’s rollout

For its part, Canada continues to move forward at a slower pace. Regulators here are expected to mandate the devices as well, but no sooner than the spring of 2019. That’s if a first draft of the rules appears in Canada Gazette: Part 1 before the end of this month, quickly passes through a mandatory 60-day comment period, and is published right away in Canada Gazette: Part 2.
When a proposed mandate is unveiled, it could also expect some opposition as industry trade groups ­continue to push for more time to prepare. News of Canadian regulators’ interest in a one-year rollout began to emerge this June, said Mike Millian, president of the Private Motor Truck Council of Canada, briefing his members on the plans. “One year is pretty short for all the devices that are going to be installed.”
There is no small irony in the fact that Canada is ­lagging the U.S. in setting a standard. Regulators here were preparing technical standards for such devices before their U.S. counterparts began pushing forward with rules of their own.
But as similar as the rules are expected to be, there will likely be differences, Millian said. Transport Canada has indicated it will exempt trucks that are rented for 30 days, lining up with a proposal from the Truck Renting and Leasing Association, he explained. South of the border, an exemption only applies to trucks that are rented for eight days or less, aligning with the time limits in place to fix a malfunctioning device.
Like any rule, there are also exceptions in the U.S. mandate. Paper logs, for example, will continue to be accepted in trucks that have pre-2000 Model Year engines.
Millian was also critical of a U.S. approach that has manufacturers self-certifying products, some of which were registered before rules were even finalized. “It’s the most asinine thing I’ve ever heard of,” he said, adding that Transport Canada officials have suggested they plan to follow a similar path.
Jacques DeLarochelliere, president of Isaac Instruments, points to an approach by some manufacturers that might not work in cases without cell coverage. Some cloud-based devices actually link to the engine’s Electronic Control Module through a cellular connection. If a device like that is used in an area without adequate cell coverage, the device wouldn’t comply in those instances. “The operator has to choose a system that will be compliant everywhere it operates,” he says. “The mountains and the regions along the border have the worst cellular coverage.”
Since the equipment is “self-certified” – meaning that vendors are the ones who say whether a device complies with the rules – it’s important to ask questions when spec’ing an ELD, DeLorenzo said. A ­recently introduced online file validator, for example, can identify any problems with the data being transmitted. “It’s a pretty straight upload process and will kick back a report,” he added, challenging reports that have suggested there have been problems with the system. Then again, many devices were self-certified before that tool was even available.
Mooney is sure there will be a “couple” of ELD’s that don’t comply. But regulators believe most issues will be addressed with software patches rather than requiring the equipment to be rejected outright, he said.
It’s up to fleets to ensure that their devices comply. PIT Group of FPI Innovations, a Canadian organization, now offers third-party certification to help with that very thing.
Of course, some carriers operating in the U.S. have yet to decide what they’re going to use at all.
“It sure feels like there are a ton that aren’t doing anything yet,” said Eric Witty, PeopleNet’s vice president – product management, referring to smaller carriers and owner-operators who have yet to order or install devices. “Regardless of the 100 different products that are out there to be ELD-compliant, is there enough supply for people [who] decide on the 10th of December, ‘I guess I better get something?’”
Those who have existing Automatic On-Board Recording Devices (AOBRD’s) can have that technology grandfathered in the U.S. until December 16, 2019, but there are limits in that respect as well. The ­grandfathered technology can be moved into different trucks, but only as long as the vehicles aren’t adding to a fleet’s overall capacity. Any additional trucks will require a device that meets the ELD standards.
If drivers end up moving from a truck that has an ELD into another truck that has an AOBRD, meanwhile, there are other steps to follow. “One way or the other, whether it’s a printed copy or ­edited into the ELD, make sure your ­driver has the previous seven days [of logs],” DeLorenzo advised. There is no option to hand write logs and reconstruct the Hours of Service.
The mixture of devices could present challenges during future rollouts, Witty adds, referring to the slip-seating and sharing of equipment form one terminal to the next. When it comes time, he recommends such fleets should change entire facilities to ELD’s in the name of training efforts and support.
Sharing the data

At the roadside, ELD data will be transferred by the web or email, or uploaded through a Bluetooth link or USB key. If all else fails, the ELD is expected to have a display screen or printout. Officers will give drivers a code to transfer the data, and the file will be accessed.
“It’s also very important for drivers to know what they have,” DeLorenzo said, referring to the way data can be transferred. “The more your driver knows, the easier that inspection will go.”
The rules don’t require drivers to let enforcement officers walk away with the devices. He suggested training drivers to step out of the truck and hold the screen to show required data.
The technology itself isn’t new. Millian introduced ELD’s when working at Hensall District Cooperative’s Ontario fleet in 2013. But preparations involve more than throwing a switch. The best approach is to review two or three suppliers, install the devices, and then train everyone involved, he says. Cheat sheets or visor cards to answer basic questions such as how to read the screen and access information are helpful, too. There are inevitably calls from drivers who forgot to log into devices, or don’t know what to do if they see a truck was moved by a member of the maintenance team who forgot to log in as well.
“If you’re running into the states and don’t have ELD’s installed, you’re already late,” he said. “Stuff’s going to happen. Nothing’s perfect.”
But the devices did help reduce paperwork. Logs were verified automatically, and form-and-manner violations like incorrect dates disappeared, as did issues caused by drivers incorrectly adding up their available hours.
Only one driver quit because the devices were installed, Millian said. “He was a good one to lose.”