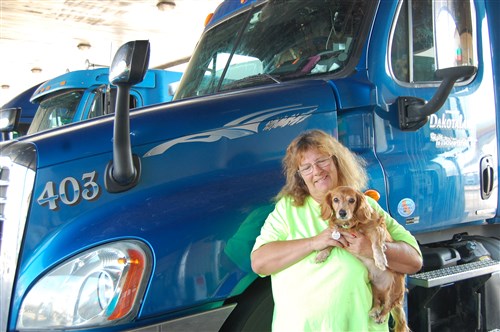 Women think of trucking and picture heavy machinery and an all-male job. Recruiting ads don’t speak to women and many females are afraid to be alone in a truck with a male trainer they don’t know.
Those are a few of the obstacles to attracting more women to the industry, said women industry stakeholders Wednesday in a Web roundtable discussion made open to individual drivers and members of the news media.
It was sponsored by Omnitracs and featured Omnitracs’ Senior Director of Analytics and Modeling Lauren Domnick, Sherri Garner Brumbaugh, president and CEO of Garner Trucking, and Ellen Voie, president and CEO of Women In Trucking.
Domnick said Omnitracs’ data-capturing technology shows that women tend to stay longer with their carriers than men, drive 800 to 900 more miles a month than male drivers, and have fewer preventable accidents than their male counterparts.
Recruiters should target those facts, she said.
Voie said trucking has to do a better job of letting women know that technology and equipment such as automated transmission, better ergonomics in the cab and improved truck stop facilities for women are just a few of the things that have changed about trucking over the years.
“The industry has changed, the job’s changed, trucks have changed,” she said. “It’s a lot different now.”
Brumbaugh agreed that misconceptions about driving a truck abound, one of them being that a driver has to be out on the road three to four weeks at a time.
She said, “not all companies operate that way.” Her company, for instance, has slip-seating where two drivers share a truck and spend four days home and four days driving.
“You have to be creative with your lanes and get folks home,” she said. And it’s not just women who want more home time she said, more men are wanting to be part of the child-rearing process.
Carriers must do a better job of training new recruits not just how to drive the truck, but about the lifestyle, and communication is key, Brumbaugh said.
There need to be peers in place to discuss the challenges of being home for long periods of time and carriers’ communication channels must be open “24/7 365” in case of home emergencies or problems out on the road, she said.
Voie said a WIT-commissioned survey found that only 16 percent of women have been offered mentors but that mentoring is high on women drivers’ wish list.
As to technology, the panelists agreed that technology like automated transmissions and safety enhancements not only attract women drivers, but millennials as well, although Voie pointed out that women drivers want everyone to know they can shift gears just as well as a man.
Voie said it’s also important that career days emphasize to young women that there’s excellent money to be made in trucking and that women already enjoying a driving career need to encourage their female family members and friends to get into trucking.
Both Voie and Brumbaugh emphasized that carriers need to have a zero-tolerance policy against harassment and that the policy needs to be communicated clearly and often.
Brumbaugh said, “a fish stinks from the head down” and that company executives need to set the example, have a whistle-blower policy in place and provide a safe atmosphere for employees to air their concerns.
She added that harassment can come from customers, too, and it’s important to communicate the zero-tolerance policy to them.
Where possible, female new hires appreciate and want women trainers, Voie said, adding that male executives still need to provide mentoring in the right situations and don’t need to be so afraid of the “Me Too” movement that they refuse to provide leadership guidance to women employees they’re in charge of.
Brumbaugh pointed out that in her career, her father and other male mentors in the industry got her where she is today.