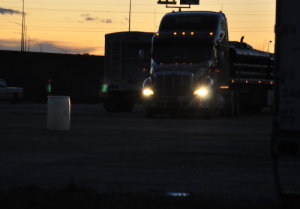 The current stay of enforcement of the 2013-implemented rules governing truckers’ use of a 34-hour hours-of-service restart could be removed as soon as Sept. 30, 2015, according to the text of the law that temporarily suspended the rules. If the stay is removed, truck operators would again have to include two 1 a.m. to 5 a.m. periods in any use of a 34-hour restart and be limited to using the restart just once a week — regulations suspended last December by Congress.
But before the rules can go back into effect, the Federal Motor Carrier Safety Administration must submit to Congress a report based on a five-month field study on the rules. FMCSA spokesperson Duane DeBruyne says FMCSA is still in the data collection phase of the study and has not yet started to analyze the data. He did not say how long analyzing the data and producing a report on the study would take, but he said the agency hopes to “provide an update on the study schedule soon.”
He also confirmed that the suspension of the 2013 restart regulations will stay in effect until the final report is produced. Unless Congress acts before receiving FMCSA’s report, however, the submission of the report is all that’s required for FMCSA to reinstate the suspended rules.
The House in its 2016 DOT-funding bill cleared earlier this year went a step further with the suspension of the restart rules by including a provision that said the suspended regulations can only go back into effect if FMCSA’s study shows the 2013 rules “demonstrated a statistically significant improvement in all outcomes related to safety, operator fatigue, driver health and longevity and work schedules” when compared to drivers operating under pre-2013 rules. The Senate version of the bill, cleared by committee, also includes the requirement that the study show the 2013 rules are of greater safety benefit than pre-2013 rules. It has not been passed by the full Senate yet. President Obama also has threatened to veto the House version of the bill, citing the hours-of-service provisions as one of the reasons.