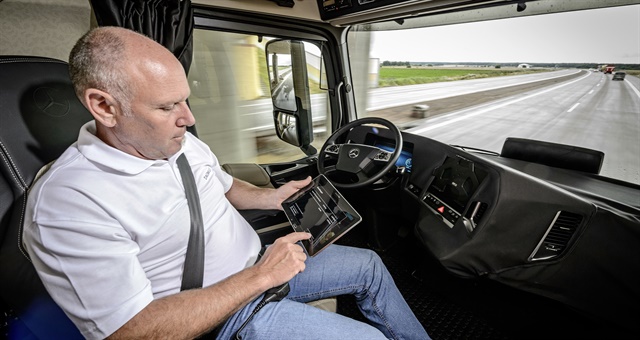 When start-up tech companies promise “driverless trucks” as an answer to the driver shortage, I shake my head. While automated and autonomous technologies may indeed help fleets attract new drivers and improve efficiencies to where fewer drivers are needed, I do not believe robots are going to put millions of truck drivers out of work. Certainly not in the near future. And the authors of a recent report by the Brookings Institute agree.
“In addition to the numerous regulatory and logistical hurdles that automated trucks still need to clear, generalizing the skilled work undertaken by millions of truck drivers and their peers overlooks how this industry functions,” write Joseph Kane, Senior Research Analyst and Associate Fellow, and Adie Tomer, Fellow, both with Brookings’ Metropolitan Policy Program.
The report takes a look at data to see whether it backs up the contention of “self-driving trucks” supporters about how fast the advance of this technology will be. And, the authors say, the numbers simply don’t back up those assertions.
For instance, they say, the Department of Labor’s O*NET database shows how truck drivers have a lower “degree of automation” compared to most occupations nationally. “The average degree of automation… remains quite low (29.6) for all occupations, and heavy and tractor-trailer truck drivers (22) and delivery drivers (24) rate even lower than that,” notes the report. “Significantly, they also rate lower than some of the country’s other largest occupations, including office clerks (32), cashiers (37), and receptionists (47).”
If you think about it, at many companies, the job of a receptionist is already largely automated, thanks to voice mail. And some grocery stores and big-box stores have some self-serve checkout lines, cutting the need for cashiers. Yet even in these cases, these jobs are only partially automated, allowing some tasks of the job to be handled automatically. This automation may make the work more efficient and allow companies to hire fewer receptionists or cashiers, but there are some things for which you still need the human touch.
And that’s even more the case in trucking. As the Brookings report points out, “drivers are not simply sitting behind the wheel all day on auto drive. They also inspect their freight loads, fix equipment, make deliveries, and perform other non-routinized tasks.”
Those in the industry, even those at the forefront of research on automated and autonomous technologies, continue to emphasize this point. At the Mid-America Trucking Show in Louisville, Kentucky, last month, Bendix, which makes the braking and advanced safety technologies that autonomous technologies are based on, emphasized that “the road to autonomous vehicles will be a series of gradual technological steps consisting of automated systems designed to help drivers be safer and fleets be more efficient.”
And Kenworth Chief Engineer Patrick Dean, despite Paccar’s recent announcement that it’s partnering with Nvidia on autonomous techology, told me, “Kenworth sees a place for the driver in trucks, full stop.”
That doesn’t mean we don’t need to be prepared for changes automation will no doubt bring, just as upstarts such as Uber and Airbnb are changing the taxi and travel industries. Platooning, for instance, is on the horizon, and that will test the abilities of some of the technologies leading to automated and autonomous trucks. We could see autonomous technologies used as a sort of cruise control on steroids, allowing drivers a break that could leave them more rested or allow them to deal with paperwork or other non-driving tasks. There are some intriguing possibilities for improved efficiency and safety and a better driver environment.
But I wouldn’t give up your commercial driver’s license or close up your driver training school anytime soon.