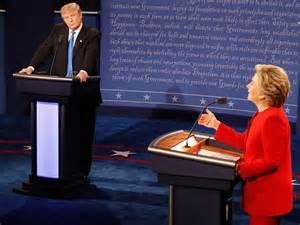 If you tuned in to last night’s debate hoping for some insight into anything other than Hillary Clinton’s email server or Donald Trump’s tax returns, you probably went to bed wishing you’d watched Monday Night Football.
By and large, I found the 90 minute “debate” an utter waste of time and almost completely void of meaningful discourse. Undoubtedly there were a handful of voters on the fence who fell one way or the other last night, but the debate itself was entertaining for all the wrong reasons.
There are somewhere around 319 million people living in this country and I wouldn’t bet very many of them learned anything last night they didn’t already know. Although I didn’t know you could get Hillary Clinton’s book at an airport and I found out Donald Trump could have used a Claritin.
With terrorists to fight and mounting national debt transportation might be the least sexy political topic on the docket, evidenced by the amount of time dedicated to it last night. I think Trump was the only one to mention anything remotely related to trucking when he inferred that for the U.S. to be $20 trillion in debt, our roads and bridges aren’t in very good shape. Clinton briefly talked about infrastructure early on but moved on quickly. All told, the country’s 47,856 miles of Interstate got about 10 seconds of the roughly 5,400 second broadcast.
That would have been a great time for either candidate to pivot toward a topic that affects almost all of the voting public, but there’s a reason why Monday night’s debate was expected to supplant the Cheers finale as the No. 3 most watched TV broadcast in history and infrastructure ain’t it.
According to Clinton’s website, she plans to improve roads and reduce congestion with a $275 billion, five-year plan to rebuild infrastructure. She’s pledged to work toward passing her infrastructure plan in her first 100 days of office.
Trump is calling for up to $1 trillion be spent on new roads and bridges, among other things. Trump says he plans to fund his plan by borrowing billions dollars while rates are low. Clinton’s plan calls for a mixture of business tax refinements and investments.
Major infrastructure investment could stave off impending recession (if you believe one is looming) and it could further insure the country against a recession for a while. However, construction spending is strong and the labor force is weak. According to the Associated General Contractors of America, The Street reported two-thirds of construction firms are having a hard time filling positions for skilled workers.
Going all in on an infrastructure plan with an already stressed labor force could cause massive project delays nationwide.
Roads and bridges isn’t something at which you can throw a mountain of cash and solve problems. Neither candidate showed Monday night that they understood that. There are two more debates on deck – Oct. 9 and Oct. 19 – and I hope more time is dedicated next month to meaningful discussion about jobs, roads and, you know, the stuff us regular people worry about every day.
If you missed the game last night, the Falcons won. And if you tuned into the debate hoping for valuable input from the next leader of the free world, you probably lost.