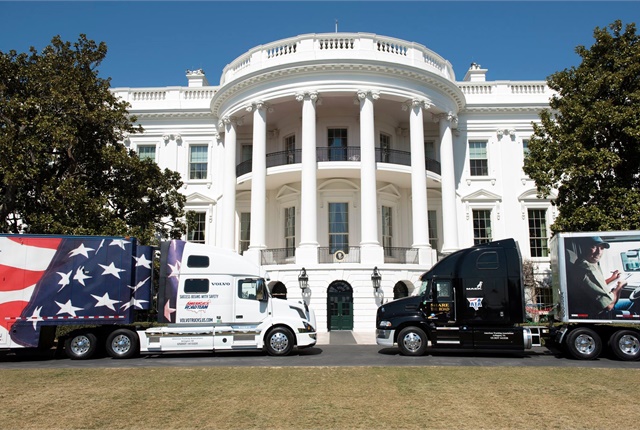 A visit from the trucking community to the White House may have resulted in a comment about fuel taxes by President Trump in an interview that led to widespread reporting that the president would consider raising fuel taxes to help pay for infrastructure. His press secretary later emphasized that the comments did not indicate support for such a strategy.
“It’s something that I would certainly consider,” Trump told Bloomberg News. A higher gas tax has the support of truckers “if we earmarked money toward the highways,” he said.
However, White House press secretary Sean Spicer Monday, when questioned about the interview, emphasized that the president did not express support for a fuel tax.
“What the president said during that interview is that folks from the industry had come to him and expressed to him how the deteriorating roads were affecting their ability to deliver goods and services throughout this country, and that they had expressed a willingness to see something like that as a way to help pay for and repair the roads and bridges.”
While Spicer did not name the “folks from the industry,” American Trucking Associations has formed a highway funding task force and did meet with the president at the White House in late March.
“People ask the president all the time, ‘Please consider this policy,’ and he has an open mind,” Spicer said. “And I think that’s frankly what the president was doing.”
The federal government has not raised the excise tax on diesel and gasoline since 1993.
In an interview on CNBC, Trump infrastructure advisor and real estate developer Richard Lefrak from The Lefrak Organization admitted that a fuel tax is one of the third rails of politics. “I believe it’s going to be considered but it’s a political hot potato for sure.”
U.S. Senator Tom Carper (D-Del.), top Democrat on the Senate Environment and Public Works Committee, issued a statement in response to Trump’s Bloomberg comment. “For decades, we have largely paid for our roads, highways and bridges with user fees so that the people and businesses who use our transportation system help to pay for it. Unfortunately, we have moved away from that approach in recent years and have woefully underfunded our transportation system as a result.”
Carper referred to a bipartisan proposal he put forth seven years ago with the late Sen. George Voinovich (R-Ohio) that called increasing the gas and diesel tax by 4 cents per year over 4 years, and then indexing it to inflation. “This investment would only cost the average driver the equivalent of a cup of coffee a week – not a high price for a modern transportation system we can be proud of and one that can move our country’s economy in the right direction.”
However, he noted, “gradually raising the gas and diesel tax is just one element of an all-of-the-above approach to funding our transportation system, and we must not lose sight of other innovative ideas like vehicle-miles traveled, tolling and public-private partnerships.”
DOT Secretary Elaine Chao told CNBC the president has made this his top priority and “he’s challenging his country and his advisors” for a trillion dollars in infrastructure over the next 10 years. She spoke about funding infrastructure through partnerships with the private sector, with governors, perhaps sale of government assets, and through the tax reform package that is being discussed.
Chao also expanded the notion of infrastructure to include things such as broadband, veteran’s hospitals, energy, and water, “so it is really an infrastructure proposal for the future” and “it will be a partnership and done with the states.”