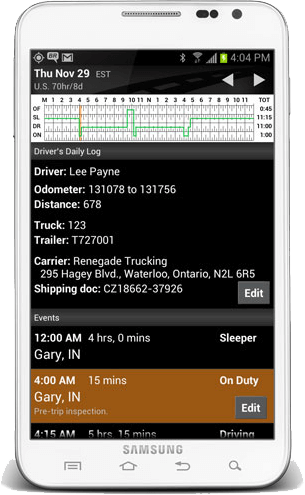 The Federal Motor Carrier Safety Administration announced Thursday that it will, at least for five years, allow drivers using mobile device-based ELDs (those run on a phone or tablet) to change duty status outside of and away from their vehicle. Such changes in duty status will need to be annotated, the agency says, but will be permitted under a waiver request granted to UPS by FMCSA.
The agency granted Thursday two waivers for all carriers related to the electronic logging device mandate. The other waiver allows carriers, at least for five years, to perform multiple yard moves without having to re-enter “yard move” on the device.
The exemptions were part of a four-part request by UPS. FMCSA did not grant the other two parts of the request, related to the phase-in of ELDs for carriers already using less sophisticated automatic onboard recording devices. The agency also declined an ELD exemption request from another fleet, who asked FMCSA to grant an exemption from the mandate for some of its drivers who operate similarly short-haul drivers but are still required to keep records of duty status.
The ELD mandate requires that devices automatically record when a driver indicates a change of duty status and when an authorized user logs in or out of an ELD. In UPS‘ exemption request, it stated that per their drivers’ bargaining agreement, they are mostly paid by the hour and use electronic devices to clock in and out while in the dispatch building and not in their trucks. However, if the drivers’ mobile device-based ELDs are not connected to a truck’s ECM, their change in duty status would not be automatically recorded.
FMCSA granted the exemption because it says it’s not necessary for portable ELDs to automatically record change in duty status and logins and logouts of the devices when the drivers are not in the trucks with the devices connected to the ECM. Instead, these drivers will be allowed to annotate the ELD record to indicate their appropriate duty status. Any time the driver is in the truck with the engine on, the portable ELD is required to automatically record when a driver changes duty status and when a driver logs in or out of the ELD.
The other part of the UPS exemption that was granted to apply to all carriers allows fleets to configure an ELD with a yard move mode that doesn’t require the driver to re-enter “yard move” status every time they turn off the truck.
To ensure compliance with the exemption, the ELD must be able to switch to “driving” mode when the driver inputs “driving” mode, when the truck exceeds 20 miles per hour, and when the truck exits a geo-fenced yard.
FMCSA also issued clarification on the other two parts of UPS’ exemption request. The fleet said in its request it plans to replace current trucks that have AOBRDs with new trucks. It asked to be able to put AOBRDs in the new trucks until the Dec. 16, 2019, transition date. FMCSA has clarified this in a FAQ section on its website, stating fleets that use AOBRDs before the Dec. 18, 2017, ELD compliance date can install that same AOBRD in a new truck that replaces the old truck. A new AOBRD cannot be installed in these trucks or in any new tractors that do not replace old tractors.
Finally, UPS’ request stated the company wanted an exemption for its wash and fuel employees who only drive the trucks on company property. FMCSA clarified in its decision that because these employees don’t drive on public roads, they are not subject to hours-of-service regulations and do not need to use ELDs.
MBI Energy Services denied exemption request:

MBI Energy Services, a water service hauling fleet in North Dakota, South Dakota, Wyoming, Montana and Colorado, requested an exemption from the ELD rule in July for its vehicles equipped with single-passenger cabs that are used in applications where travel is rare.
In its request, MBI said because space is limited in these cabs, ELDs would reduce driver visibility.
FMCSA says it denied the exemption because MBI “did not demonstrate how, without using ELDs, they would maintain a level of safety equivalent to, or greater than, the level achieved without the exemption.”