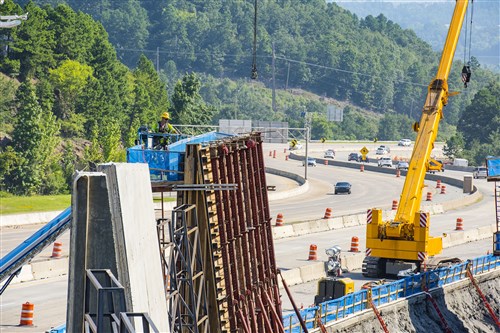 WASHINGTON — A large coalition of national trade associations, all of which are stakeholders in infrastructure investment, called on Congress to pass a plan that increases direct federal project spending on infrastructure and encourages participation by states and private investors “without shifting federal responsibilities.”
The American Association of State Highway and Transportation Officials (AASHTO) Journal has reported that in a January 3 letter to congressional leaders that was also sent to the office of every member of Congress, more than 150 groups signed on including the National Association of Manufacturers, AASHTO, American Public Transportation Association and the National League of Cities.
“Passing a comprehensive package that transforms U.S. infrastructure systems beyond the status quo is necessary to maintain U.S. economic competitiveness,” they wrote. “We urge you to work across the aisle to develop a proposal that ensures U.S. infrastructure is second to none.”
Signers included groups representing engineers, bicyclists, tour groups, rail passengers, contractors and construction material suppliers, toll facilities, seaports and barging companies.
Also included were many organizations that depend on a well-functioning transportation system to bring factory inputs or distribute commodities and products. Among them were the National Retail Federation, American Wood Council, International Bottled Water Association and groups for bakers, corn growers, oilseed processors and home furnishers.
News reports have described the yet-to-come White House plan on infrastructure investment as one that would propose $200 billion of additional direct federal spending over 10 years to leverage $1 trillion in total project investment that includes contributions from private investors plus state and local governments.
That would contrast with how the Highway Trust Fund (HTF) currently distributes funds to states, the Journal article said. The federal program generally covers 80 percent of the cost of qualified capital projects on federal-aid roads and bridges, leaving state and local partners to come up with 20 percent.
But more broadly, the letter writers said since states and local governments pay ongoing maintenance and repair of their road networks as well as directly paying for many new projects, those partners shoulder about three-fourths of total U.S. road and bridge spending while federal programs cover the remainder.
In addition, President Donald Trump’s plan would reportedly try to cover at least some of the direct federal cost by cutting other domestic programs, which could undermine support among lawmakers to defend those programs.
Many transportation stakeholders had also urged the president and Congress to take advantage of the tax reform process to generate new funds for infrastructure generally and to bolster the HTF in particular, but policymakers left those issues untouched by the tax bill, the Journal article said.
In their letter, the associations said any plan Congress passes should fix “chronic challenges” and recurring shortages “in key federal infrastructure accounts such as the Highway Trust Fund.”
The letter writers also took aim at reports that the administration plan could actually weaken the federal role in infrastructure investment. That could happen if the administration uses some of the additional federal dollars to reward projects that provide a large non-federal cost share, rather than disburse the funds by long-established formula so state departments of transportation and other agencies could apply money where most needed.
The groups said they want Congress to pass a plan that “encourages active participation among all levels of government and between the public and private sectors without shifting federal responsibilities because no single partner can deliver a well-functioning, national U.S. infrastructure network driven by a long-term vision and funding stability.”
The associations said a new infrastructure investment package could “improve the safety, reliability and efficiency of our nation’s infrastructure.”
And they said the need is widespread. “Substantial and long-term investments in all kinds of infrastructure are needed to expand our economy, grow jobs and compete globally.”
They also urged lawmakers to pass a plan that “complements and strengthens” existing project finance tools such as municipal bonds, one that facilitates opportunities for private investment and improves efficiencies “such as accelerating the federal permitting process.”