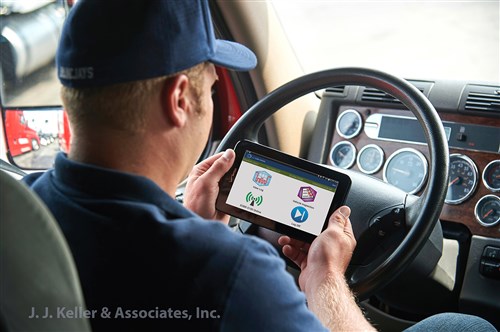 Summer’s here and the heat is on — or it will be soon when it comes to ELDs. In mid-July, the staff at The Trucker noticed we’d been hearing the same thing throughout the trucking industry — the assertion that somewhere between 70 and 80 percent of carriers had not yet been fitted with ELDs.
In an age of viral misinformation, we wondered if this was just a popular myth making the rounds. The thing about myths, though, is that very often they’re based on at least a kernel of reality. With the ELD deadline, December 18, barely four months away, if the number of carriers that still need to get ELDs is anywhere close to that high, is it even possible to get everyone fitted in time?
Before asking that, the first question is where was this estimate was coming from? Collin Mooney, executive director of the Commercial Vehicle Safety Alliance, said no agency or entity he knows of is trying to keep track.
“I haven’t seen or heard of any studies or any numbers to actually get a pulse on what the numbers really are,” Mooney said.
Neither has Tom Cuthbertson, vice president of regulatory compliance at fleet management company Omnitracs. “That’s a hard number to hang your hat on,” he said. CVSA did estimate that the mandate would apply to about 3.1 million vehicles, and Cuthbertson had recently heard that 800,000 and 900,000 have ELDs.
That would put the percentage without ELDs at about 70-75 percent.
Tom Bray, an industry consultant with J.J. Keller & Associates, said he believes the estimate is based on individual ELD company observations.
“The providers are looking at the carriers that are out there that they know about or they work with and coming up with these numbers,” Bray said. Among Keller’s regular customers, indeed, 75-80 percent had not transitioned to ELDs yet.
OK, so the next question is, considering it’s been more than a year and a half since the mandate was announced, why are so many carriers dragging their feet on this?
Not all of them are, Bray said. Among large carriers, about 81 percent are already using ELDs, he said, and “the other 19 percent are well on the way.”
That comes as no surprise to David Owen, president of the National Association of Small Truck Companies. Owen says from its very inception the mandate has been a big guy vs. little guy issue. The big companies are all for ELDs, he said, and smaller companies see the mandate as just one more unnecessary layer of regulation and technology being foisted upon them. Some older drivers are deciding whether they even want to stay in the business.
“It’s just kind of the final straw theory, I think, or they talk like it is,” Owen said.
Bray concurred. Many are hoping that somehow the mandate “just goes away,” he said. “They’re hoping someone steps in.”
Owen noted that in early June when the Supreme Court rejected a petition by the Owner-Operator Independent Drivers Association to review its lawsuit to halt the ELD mandate, ELD sales jumped.
Owen added that a lot of small carriers are hesitant to lay out the money on a system and then get out on the road and find out it isn’t compliant after all.
“One of our arguments is that FMCSA was negligent in not spelling out exactly what an ELD was months ago,” he said. Instead, the FMCSA left manufacturers “to play badminton in the dark” in designing their systems, and then let manufacturers self-certify their systems.
Cuthbertson disagrees. The FMCSA has a great deal of ELD information on their website, he said. “Even in their FAQs, they put information of what things you should look for to be sure that this is a certified product. It’s still up to the carrier to take a look and make sure that they’re doing some due diligence that the product met the specifications.”
Bray noted there’s a segment of the industry that just hasn’t done its homework. Some don’t think the mandate applies to them. Others may be planning to get an ELD but don’t realize how involved a process it is.
“There’s a segment of the industry that’s out there that think, ‘I’ll buy one on December 17th and plug in and be good to go on the 18th,’” he said. “They don’t understand the learning curve you have to go through so you’re not making foolish mistakes and hurting yourself.”
Small carriers with multiple drivers should give themselves two to three months to make the transition, Bray said. “Something like 92 percent of the industry is under 20 power units,” he said, so even though there are a lot of carriers who need get an ELD system, most of them still have the time to get it done.
“We fully expect a pretty significant curve in demand, a steep curve in the next two quarters,” said Tom Neppl, vice president of hardware solutions at Omnitracs. Companies are gearing up to meet that demand.
However, Neppl warns, “There is a significant supply challenge right now in the electronics industry as a whole.” Between recent jumps in memory technology and a plethora of new products that have hit the market, Neppl expects there will be component shortages that might hinder ELD production just when demand is at its highest.
Bray is a bit more cautiously optimistic. “Your small guy is going to want something inexpensive that’s easy to install, easy to work with,” he said. Those can be rolled off the assembly line fairly quickly.
“But there’s going to be a crunch come November, December, no ifs, ands or buts.”