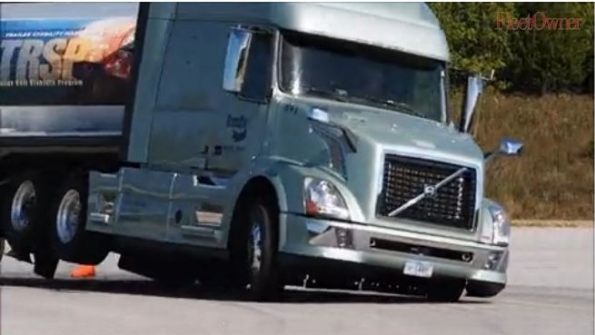 Self-driving trucks get lots of fanfare, but before that technology approaches the mainstream, the gap will be bridged by systems like Volvo Trucks’ active safety technology, which is engineered to support and assist — not eliminate — the professional truck driver.
Think of that technology as making the driver superhuman since, unlike airline pilots, truck drivers steer their industrial-grade machines and tens of thousands of pounds of cargo along non-uniform roadways with unpredictable passenger vehicles all around. It’s remarkable how few mistakes they make, but anyone can lose focus in a given moment, become fatigued or distracted and make some critical error.
That’s where Volvo Trucks North America’s (VTNA) safety technology steps in. VTNA showcased its history of safety engineering and demoed active safety systems at its first Safety Symposium recently at the vast Michelin Laurens Proving Grounds in Laurens, SC.
Safety technology doesn’t just mean the kinds of “driverless” systems and related components getting so much press today. For example, noted Rob Simpson, director of brand and marketing development at VTNA, Volvo’s iShift automated manual transmission introduced in 2006 reduces collision risk by 22% by reducing driver fatigue and distraction related to manually shifting through, say, 18 speeds.
Or Volvo’s downspeeding engine-transmission package available since 2011 not only boosts fuel economy, it reduces in-cab noise drone and driver fatigue. And in dealing with collisions, Volvo tractor cabs are designed to take a hit and protect the driver, with collapsible steering columns, breakaway pedals and engine/transmission drop-down in a front-end crash. Volvo is also the only OEM with standard driver-side airbags in its heavy trucks, Simpson noted.
But the stars of the show — or symposium, as it were — were the company’s optional active safety systems featuring Bendix Commercial Vehicle Systems technology. Volvo Enhanced Stability Technology (VEST) can adjust engine torque and apply the brakes to help prevent rollovers and other loss-of-control situations, while lane departure warnings use a windshield-mounted camera to monitor road lanes and warn the driver if he or she drifts. Volvo Enhanced Cruise maintains a safe following distance behind another vehicle and can stop the truck to prevent a collision.
For more about this new era of “superhuman” truckers, see the full story, along with test track video, on FleetOwner.com.