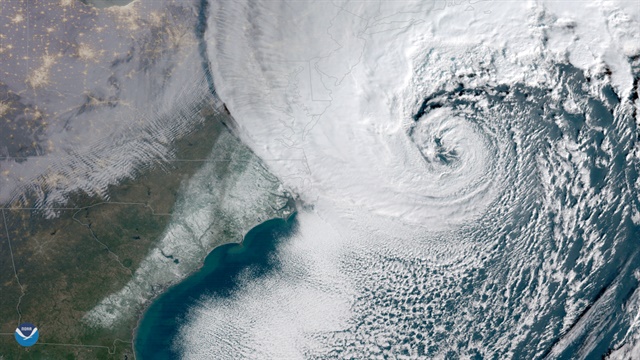 A massive winter storm has slammed the East Coast from Florida to Maine, bringing with it snow, high winds, and frigid temperatures that are creating difficult traveling conditions across a wide swath of the Northeast.
Commonly referred to as a Bomb Cyclone type of weather event, Winter Storm Grayson quickly grew into one of the most powerful East Coast winter weather phenomenons in recent history. It includes a dangerous mix of snow, thunderstorms, and winds of up to 80 miles per hour, and states up and down the Eastern Seaboard have braced for blizzard conditions.
New York Governor Andrew Cuomo declared a state of emergency for parts of the state in advance of the storm’s main impact, with predictions of up to 11 inches of snow in some portions of the state. Up to two thirds of the flights out of the main airports in the New York region were being cancelled on Jan. 4, according to a New York Daily News report. Road traffic and public transit were also being affected, though not to the same degree.
New Jersey Governor Chris Christie also declared a state of emergency for portions of the state and closed all government offices for the day.
Southern states were also affected, with unseasonal deep freezes in places like Charleston, S.C., and Savannah, Ga. Georgia Governor Nathan Deal issued a state of emergency for coastal communities on Jan. 3. In Florida, areas that had not seen snow in nearly 30 years were given a light dusting of powder, bringing with it the specter of snow-covered palm trees.
Some seaports have also taken winter weather precautions with the Port of Virginia closing terminal gates on Jan. 4 until Friday afternoon at the earliest. The Coast Guard has also blocked incoming ships to the Chesapeake Bay area, affecting traffic to the Port of Baltimore. Terminals however, will remain open to trucks carrying goods in and out of the complex.
While the storm is fast moving and will likely be gone by Friday, it will leave extremely cold temperatures in its wake. Below zero temperatures are being forecast as far south as Jacksonville, Fla., with some East Coast cities approaching -40 degrees Fahrenheit. So far,12 deaths have been reported across the country as a result of the cold weather, according to CNN.com.