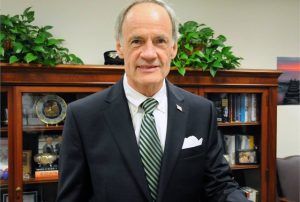 All that’s needed to restore the Highway Trust Fund is to raise federal fuel taxes by four cents a year for four years and then index the rates to inflation from then on.
That’s the contention of Sen. Tom Carper (D-Del.), who introduced his TRAFFIC Relief Act on August 5 to provide a “long-overdue update to the country’s fuel taxes for transportation investments.”
The bill would seek to absorb the impact of the 16-cent jump in fuel taxes that would be in effect by 2020 by extending and expanding certain tax credits for individuals.
Specifically, the legislation would extend and expand the earned income (EITC) and child (CTC) tax credits. It would make both credits permanent and also expand EITC for childless workers; index the CTC to inflation; and “make it easier for working Americans who qualify to claim the EITC,” noted Sen. Carper.
“America has funded transportation systems, including the entire Interstate Highway System, with the gas tax for 83 years,” said Carper. “Inflation, fuel-efficient cars, and other factors mean we don’t take in as much money as we used to, yet the need to maintain and improve our transportation systems hasn’t dropped. In fact, most experts argue we need to be doing more.
“Rather than lurching from crisis to crisis, increasing country’s debt, and borrowing more money from foreign governments to pay for our transportation system, I say it’s time to do what’s right,” he continued. “At a time when gas prices are some of the lowest we’ve seen in recent memory, we should be willing to make the hard choice to raise the federal gas tax. To balance the 16-cent cost of a gas tax hike, I’ve suggested making permanent certain expiring tax cuts that will directly benefit hard-working Americans.”
Carper has suggested that a fuel-tax increase could be a “pretty good fallback plan” if other highway-funding schemes, such as corporate-tax reform repatriation, fail to move ahead on Capitol Hill, per a Politico.com blog post.
Carper’s bill was introduced just shy of a month after a measure that would hike the federal fuel taxes by over ten cents a gallon all at once— and also index them to inflation going forward— was introduced in the House by Rep. Rep. Tim Rice (R-SC).
To help defray the cost of that dime-plus increase, Rice’s Highway Trust Fund Certainty Act (H.R. 2971) would put in a new income tax credit for individuals. According to Rep. Rice, rather than raise revenue, his bill would move money from the general fund into the Highway Trust Fund.