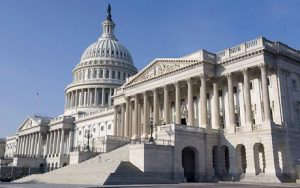 The Senate’s committee on transportation and commerce is scheduled to take up Wednesday, July 15, an expansive transportation regulatory reform package that calls for the removal of CSA scores from public view, allows hair testing to satisfy driver drug testing requirements and allows under-21 CDL holders to drive interstate, among other stipulations.
The regulatory package would be a companion piece to the six-year highway bill, the DRIVE Act, already passed by the Senate’s Environmental and Public Works Committee.
Debate and voting on the Comprehensive Transportation and Consumer Protection Act is scheduled to begin around 5 p.m. Eastern, July 15.
The bill not only bundles several trucking-targeted reform bills already introduced in Congress, but its introduction and committee action could also be a sign that the DRIVE Act could have legs in Congress as a long-term highway funding option — the first under true consideration since MAP-21’s passage three years ago.
Determining how to fund the bill, however, is the major hurdle Congress faces in passing a long-term measure. The Senate Appropriations Committee, and its counterpart in the House, must determine a funding mechanism, whether it be a fuel tax increase or some other measure, such as a repatriation tax — the odds on favorite at this point.
The current MAP-21 highway funding extension, a 60-day patch cleared in May, is set to expire at the end of this month.
The House this week introduced another extension of MAP-21, which would fund the Highway Trust Fund through December. The patch would give lawmakers time to produce a bi-partisan long-term funding bill, said sponsors Reps. Paul Ryan (R-Wis.) and Bill Shuster (R-Pa.).
Check CCJ on Thursday for results of the committee’s potential vote and more of what trucking regulatory changes are in the bill.