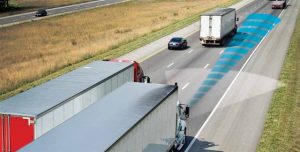 Collision avoidance systems reduce accidents and save lives and injuries, and should be standard on all new passenger and commercial vehicles, the National Transportation Safety Board declared in a statement yesterday.
In a Special Investigation Report, NTSB said the electronic systems can prevent or lessen the severity of rear-end crashes.
The safety board cited government accident statistics that indicated rear-end crashes killed about 1,700 people in 2012 and injured 500,000 more. More than 80% of these deaths and injuries might have been mitigated had the vehicles been equipped with a collision avoidance system, NTSB said.
“However, slow and insufficient action on the part of the National Highway Traffic Safety Administration to develop performance standards for these technologies and require them in passenger and commercial vehicles, as well as a lack of incentives for manufacturers, has contributed to the ongoing and unacceptable frequency of rear-end crashes,” the board said in the report issued last month.
NTSB said it has investigated rear-end crashes and has encouraged technological countermeasures since 1995. To date, the board has issued 12 recommendations pertaining to this safety issue, including in another Special Investigation Report in 2001.
However, the board has no power on its own to make regulations. NTSB investigates crashes of commercial motor vehicles, trains and airplanes, and often recommends actions in its reports to other government agencies, associations, industries and others.
“Due to a lack of progress in the implementation of NTSB recommendations intended to mitigate or prevent rear-end crashes, the recent technological advancements in collision avoidance technologies, and the continued prevalence of rear-end crashes, the NTSB is revisiting the topic of rear-end crash prevention,” it said.
“The promise of a next generation of safety improvements has been used too often to justify inaction,” said NTSB Chairman Christopher A. Hart. “Because there will always be better technologies over the horizon, we must be careful to avoid letting perfection become the enemy of the good.”
In the report, the NTSB recommends that manufacturers make collision avoidance systems standard equipment in newly manufactured vehicles, beginning with collision warning systems, and adding autonomous emergency braking once NHTSA completes standards for such braking systems.
Furthermore, the NTSB recommends that NHTSA develop tests and standards in order to rate the performance of each vehicle’s collision avoidance systems and to incorporate those results into an expanded NCAP 5-star safety rating scale.
The NTSB is also issuing a companion Safety Alert for consumers and commercial fleet owners that urges them to consider vehicles with collision warning and autonomous emergency braking functions.