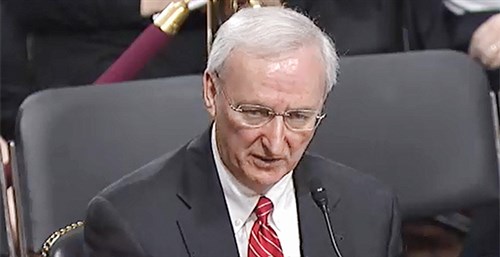 WASHINGTON — The Department of Transportation said Tuesday that Deputy Secretary Jeffrey Rosen will serve as the department’s regulatory reform officer and chairman of the department’s Regulatory Reform Task Force (RRTF).
The RRTF was formed earlier this year in accordance with President Donald Trump’s Executive Order 13777, which directs each agency to establish an RRTF to make recommendations to alleviate unnecessary regulatory burdens.
Transportation Secretary Elaine L. Chao has directed the RRTF to consider ways to accomplish DOT’s primary safety objectives in less burdensome ways and to further review “midnight rules” that were issued at the end of the Obama administration.
– Unless prohibited by law, whenever an executive department or agency . . . publicly proposes for notice and comment or otherwise promulgates a new regulation, it shall identify at least two existing regulations to be repealed.
– “For fiscal year 2017 . . . the heads of all agencies are directed that the total incremental cost of all new regulations, including repealed regulations, to be finalized this year shall be no greater than zero, unless otherwise required by law or consistent with advice provided in writing by the director of the Office of Management and Budget.
– Any new incremental costs associated with new regulations shall, to the extent permitted by law, be offset by the elimination of existing costs associated with at least two prior regulations.