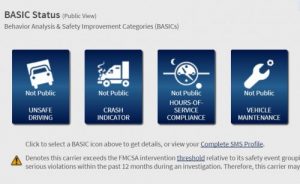 The reforms required by Congress to the federal Compliance, Safety, Accountability carrier ranking system will take about two years to complete, Transportation Secretary Anthony Foxx told a Senate panel last week. That’s the same timeline the industry can expect to see the so-called “CSA scores” — the percentile rankings in the CSA Safety Measurement System’s seven BASICs — return to public view.
“Based on our preliminary assessment, it’s going to take a while to do the revised analysis,” Foxx told the panel, referring to the changes in the CSA score methodology called for by Congress in the 2015 FAST Act highway bill. “We expect it to take a year or two, probably more like two, before that information (CSA SMS rankings) will be posted back up.”
Foxx testified before the Senate’s Commerce, Science and Transportation committee last Wednesday.
The FAST Act required the Federal Motor Carrier Safety Administration to pull CSA SMS rankings from public view, though much of the underlying violation data is still available publicly.
Congress also directed the agency to work with the National Academies of Science and other government accountability agencies to work with FMCSA to develop a plan to reform the system before the agency can bring the scores back to public view.
Since the program’s 2011 inception, many inside of and outside of the trucking industry have pointed to notable flaws in the program’s data well and the methods used to calculate carriers’ scores. The resulting flawed scores were available for third parties like shippers, brokers and insurers to view and make determinations about carriers and their crash risk, in spite of the program’s seeming disconnect with crash risk.
The program was particularly unfair for small carriers and owner-operators, many studies have shown. CCJ has reported in-depth on the subject in recent years. Click here to read coverage in the CSA’s Data Trail series.
The required reforms are meant to bring CSA scores more in line with carriers’ actual risk of causing crashes.