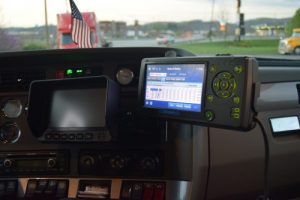 Truckload rates could jump as much as 15 to 20 percent once the DOT’s coming electronic logging device mandate takes effect next December, says Todd Amen, president of owner-operator financial services firm ATBS.
Amen says the mandate will create a “truck shortage,” likely to equivalent to about 200,000 to 300,000 trucks, he says. “You lose 10 to 20 percent of your ability to run miles,” said Amen, speaking at Overdrive‘s Partners in Business seminar Friday at the Great American Trucking Show in Dallas. As a result, he said, “My prediction is rates are going to go up at least 10 percent, but I believe they could go up 15 to 20 percent.”
Large fleets that have already adopted ELDs have seen the productivity drops associated with the devices, Amen said. Small fleets and owner-operators will likely wait until late 2017 to switch away from paper logs.