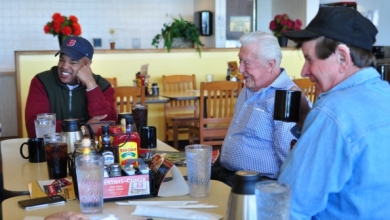 Trucking needs to do a better job of promoting itself, outgoing Federal Motor Carrier Safety Administrator Scott Darling said Thursday in a last-day conference call with trade media.
“I’ve got a different image of truck and bus drivers [since coming to FMCSA], a different respect. They’re truly professionals,” Darling said. “I want the industry to figure out how to tell that story. I’m going to be telling it every day. I appreciate everything they do, and the importance they have to this nation.”
He also emphasized that safe trucking is the “linchpin” of the American economy.
“Safety and commercial interests should not be two separate pieces—they’re together,” Darling said. “For me, it’s about compliance; it’s not about enforcement.”
Looking ahead to autonomous vehicle technology, Darling said “trucks are not going anywhere,” and he doesn’t anticipate a significant shift in driver hours of service regulations any time soon. The aim will continue to be to have qualified, healthy and rested men and women driving vehicles that are “up to standards.”
“This is marathon, not a sprint,” he said. “I want to get through the beginning parts of the race and get that right—that’s the first five years—then the rest of the race is going to be a lot easier.”
The keys to agency success are “education, education, education,” and to continue to use data effectively to identify at-risk carriers, Darling added.
Among items left unfinished, Darling cited the often-delayed Unified Registration System, an online, cloud-based way for carriers to submit information and for DOT to better guard against suspended companies coming back under new names.
“That’s a real game changer for the industry,” Darling said. “I hope the next administrator will make it a top priority.”
Darling also said he expects the National Academies of Sciences to submit their congressionally mandate review of the Compliance Safety Accountability program by mid-year.
“I think CSA is a positive tool to help the industry make improvements,” he said.
Admitting he’s been “teary-eyed” in saying his good-byes this week, Darling called his two-year tenure at the top of the agency “an incredible ride,” and said he enjoyed the time he spent “outside the beltway” getting to know fleets and drivers, and listening to ideas and solutions for helping move the economy safely. And he encouraged the next administrator to do the same.
“I didn’t come from the trucking industry,” Darling said, noting his background in transit administration. “Everything looks clear from the sixth floor [of FMCSA headquarters]. Get out there. Talk to folks. Figure out what the concerns are and bring that back and communicate that.”
Indeed, he emphasized several times the importance of collaboration, and encouraged his successor to likewise work with all stakeholders to develop “sensible, rational” safety rules.
“It is important to keep in mind that FMCSA has a diverse range of constituencies, but we also must respond to Congress—obviously—and to the states and the law enforcement community. Of course, the traffic safety advocates must also be at the table,” he said. “I’ve just been amazed by how smart all the stakeholders are and how committed they are to the work they do every day.”
In terms of political appointees managing the civil servants, Darling suggested that “up-front” communication was critical to making sure administration policy and the agency’s programs align.
“I hope that the new administration does that, too, and I believe that they will,” Darling said. “Sec. Chao has a lot of experience working in the federal government and has been successful. That’s not going to change when she gets to DOT.”