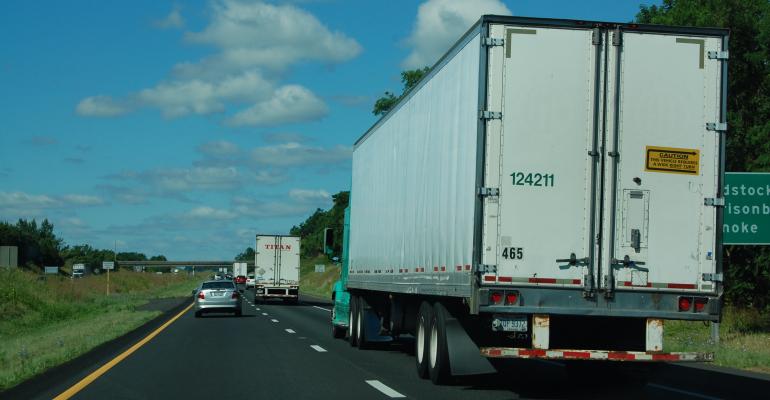 Hikes in driver pay, healthcare costs and fuel prices, plus full enforcement of the electronic logging device (ELD) mandate, are all poised to create more difficult “headwinds” for truckers, according to analysis by PLG Consulting.
As a result, PLG senior consultants Michael Muhich and Jon Gilbert noted that trucking costs are poised to rise 8% to 10% this year, creating “inflationary times” within the industry.
The trucking industry is “driving into strong headwinds,” Muhich noted during a PLG webinar this week, comprised of a driver supply shortage, rising freight demand, tougher regulations, and inflationary trucking costs. “Driver recruiting, retention and hours of service [HOS] issues have formed a big waterfall over the last 11 years [and] the ELD mandate is generating its own separate waterfall,” he explained. “So 2018 will be a critical year for solving those issues.”
Muhich thinks the current driver shortage will continue for the next eight years, as an aging driver workforce heads for retirement, regulations push out other drivers, and the trucking lifestyle dissuades younger folks from joining the industry.
“We’re short about 60,000 drivers now and that will increase to 160,000 by 2026 if nothing changes,” he emphasized. “Turnover is the big elephant in the room. Big and small TL fleet turnover from 2016 to 2017 ranged from 64% to 90%. But at 90%, you are turning over all of your drivers on an annual basis: that is not sustainable.”
To change that 90%-plus turnover rate, Muhich stressed that the “driver experience” must change. “Young people are not interested in the job as exists today – sleeping in the truck, being the lowest person in the chain of command, being away from home for long periods of time, eating food in gas station – that is not appealing to a young worker.”
He believes by improving pay, more drivers will stay. “Right now entry pay is about $48,000 a year; that translates to about $16 per hour. That makes being an Uber driver more attractive. So, we need to get closer to $100,000.”
Yet the need for higher pay is going to drive up trucking costs up further, creating in his words “inflationary times” within the industry.
“Driver pay worth 38% in terms of total trucking expense and pay will still need to be increased,” Muhich explained. “Healthcare represents 17% of total trucking costs and it is definitely going to go up as it does in every other industry. Then there is fuel, which makes up 13% of total trucking costs and fuel is up 50 cents per gallon compared to last year. That’s partly due to a spike in oil prices that is resulting in the highest [oil] prices since 2014. Those are all inflationary markers – meaning inflation is on its way in 2018 and beyond.”
Then there is the impact of the ELD mandate, he added – a mandate that Muhich described as yet another incidence of where “the government trying to help” is not working out quite as planned. “There are multiple areas where the ELD mandate will impact [a shipper’s] business – delayed shipments, overtime for warehouse workers, chargebacks, and drops in productivity,” he said. “Now is the time to start thinking about how to handle all of that as full enforcement of the ELD rule plays out over next 30 to 90 days.”
Gilbert noted during the webinar that those factors mean shippers will “ultimately have to pay close to market price” for freight transportation “so it is best to start negotiating now than wait to last minute.”
Still, he stressed that there remain ways to become a more “desirable shipper” in the market while keeping freight rates in check, if shippers are willing to deploy new tactics.
“Motor carriers complain that shippers take a long time to pay. That’s in part because the cost of capital is often much higher for carriers than for shippers,” Gilbert said. “I am a strong believer in paying freight bills as quickly as possible and trying to get a discount for doing that. For example, committing to pay in a 15-day window for a 1% [freight rate] discount.”
Another key: getting truck drivers in and out more quickly from freight depots.
“One of the biggest driver challenges is yard congestion; too many trucks descending on a facility at one time. There’s a definite lack of capacity for staging and receiving,” Gilbert noted. “So configuration of facilities and allocation of [warehouse] labor is important. Shippers may want to consider increasing hours of operations. They may be working 10 or 12 hour days but there is plenty of time to receive shipments outside of those other hours – that plays nicely in the current market with strict HOS rules.”
Muhich said something must be done on the shipper side of the ledger for as of right now the truck capacity crunch is only going to get worse. For example, in March, spot freight demand equaled roughly 7.4 loads for one driver – that’s equal to “peak season” volume for freight. By contrast, in March of 2016, freight demand was at 1.6 loads per every driver.
“At this rate, when we hit this year’s peak season, it will be a very, very tough market for moving freight,” Muhich warned. “The only thing that would slow it down is a recession – that is the only thing that would turn things back in the other direction.”