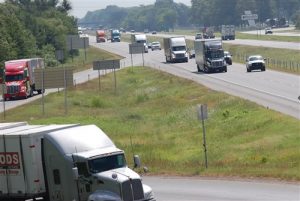 WAUNKEE, Wis. — The National Motorists Association (NMA) says it has severe reservations about “artificially” limiting truck speeds when it is “well established that speed variance among vehicles is a primary factor in crash risk.”
The NMA, which says it has several thousand members in the U.S. and Canada, stated its position in its comments sent to the Federal Motor Carrier Safety Administration and the National Highway Traffic Safety Administration, which recently published a Notice of Proposed Rulemaking on Heavy Vehicle Speed Limiters.
The NPRM didn’t establish what that speed limit might be, saying it could be “62, 65, 68 or none of the above.”
“It is time to get vocal,” NMA President Gary Biller wrote to members on the association’s website in urging members to submit comments. “Join us in letting NHTSA know that dialing speed limits back to the restrictive and less-safe levels of the 1970s, 80s, and 90s is unacceptable.”
In its comments, the NMA wrote that the proposed rule was written as if ignoring that trucks share the nation’s roads with 250 million light vehicles.
“Congestion is frequently caused by trucks overtaking other trucks at very small differences in speed,” the NMA said. “A uniform speed cap will worsen this effect, especially if it is below the speed that would normally be chosen by a multitude of truck drivers.”
The NMA said it believed that the few truck-involved crashes whose outcomes are worsened by truck speed may be exceeded by the number of new crashes caused by forcing light-vehicle traffic to pass slow-moving trucks through maneuvers — braking, accelerating, lane changing — that increase interactions and potential conflicts between all vehicles.
“The authors of the proposed rule justify ignoring this factor by pointing out that available research cannot predict the number of crashes attributable to this cause,” the NMA wrote in its comments. “But what shouldn’t be ignored is FMCSA’s own study (Large Truck and Bus Crash Facts 2013, April 2015) which documents that 80 percent of fatal crashes involving large trucks from 2011 to 2013 occurred at speed limits posted no higher than 65 mph. Nearly 60 percent of the crashes were on roads posted at 55 mph or lower. Limiting truck speeds, particularly to 65 mph or less, in the name of safety disregards the facts.”
In addition, the NMA said situations may dictate that truck drivers speed up to avoid collisions or road hazards.
“Speed limiters can take this critical safety option away from drivers when it is most crucially needed,” the NMA said.
The proposed rule would return to the strategy of the period 1974-1995 when the federal government mandated a national maximum speed limit for all traffic, the NMA said.
A national maximum of 55 mph was a provision of the federal 1974 Emergency Highway Energy Conservation Act drafted in response to oil price spikes and supply disruptions during the 1973 oil crisis.
While federal officials hoped gasoline consumption would fall by 2.2 percent, actual savings were estimated at between 0.5 percent and 1 percent.
“This was one of the most conspicuous public-policy failures in U.S. history, and was finally repealed by Congress in 1995,” the NMA comment said. “The lesson of the national maximum speed limit was that radical change to one element of the vehicle-highway system produces unintended consequences. The 55-mph speed limit yielded diversion of vehicle-miles from freeways to less-safe roads, delay and time wasted, new driver behaviors generating new modes of crash causation, and no discernible impact on traffic safety or fuel use.”
The NMA said the rulemaking emanated not from a scientific study of crash causation, but from petitions the ATA and Road Safe America.
“While claiming to be motivated by the cause of safety, these associations are in fact trying to deny other truck operators a competitive advantage in travel time and driver/truck productivity,” the comments said. “NMA requests that FMCSA and NHTSA explain why these two entities were accorded the remarkable favor of having their commercial proposition translated into a proposed federal regulation.”
The ATA says it will not support the NPRM in its current form because it fails to actually set a specific speed limit for heavy trucks.