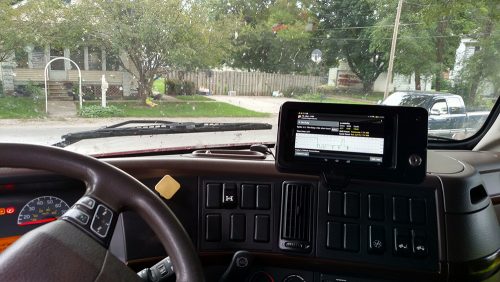 Enforcement of the Federal Motor Carrier Safety Administration‘s rule requiring drivers to use electronic logging devices to record duty status and hours compliance began Monday, but nationwide, blanketed enforcement of the mandate hasn’t truly begun in earnest, according to reporting from CCJ sister publication Overdrive.
Enforcement personnel in at least 14 states will not be issuing tickets/citations for noncompliance with the ELD mandate until April 1 — the date established by the Commercial Vehicle Safety Alliance for when out-of-service orders for ELD violations will begin being issued.
A bevy of other states, 11 at last count, have left the decision to issue tickets or citations for ELD-related violations up to the officer. With those two groups combined, at least half the country’s states are engaged in softer enforcement until April 1.
Overdrive Senior Editor Todd Dills, reporting live from a Kentucky scale house on I-65 at the Kentucky-Tennessee border on the Dec. 18 compliance deadline, noted that officers there were asking drivers for asking drivers whether they were using ELDs. Of the first three inspections conducted by Sergeant Jason Morrison of the Kentucky State Police Commercial Vehicle Enforcement unit, none of the drivers were using an ELD, though two had reported they’d placed orders for an ELD but that the unit hadn’t arrived yet.
However, Morris wasn’t in the position to document the violations, given that his state’s computer system wasn’t yet updated to encode ELD violatios. He phoned his headquarters in Frankfort, Kentucky, to note the issue, who said the update to the state’s system to allow for documentation of ELD violations could be in place as soon as today.
Below are lists of the states who’ve said they intend to offer a phased-in approach to enforcement, either by delaying issuance of citations until April 1 or who are leaving the citation decision up to their state’s enforcement officers. CCJ will update the list as states respond to queries regarding their enforcement intentions.
States delaying citations/tickets for ELD violations until April 1:

States leaving the decision up to the officer: