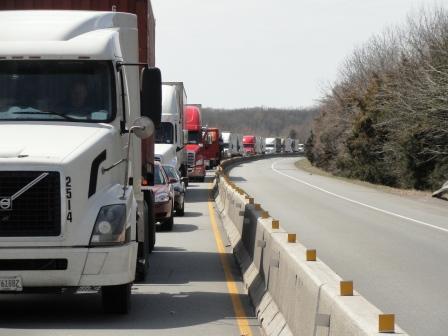 Ballots nationwide Tuesday featured a host of transportation-related measures on state and local levels, several of which could have impacts on the trucking industry via improved infrastructure funding.
Voters in Illinois and New Jersey approved constitutional amendments that lock in gas tax proceeds to transportation projects. According to nj.com, the New Jersey measure locks in more than $1 billion a year for transportation projects based on the state’s recent gas tax hike.
Similarly, an amendment in Illinois makes it unconstitutional for the state to use vehicle registration fees and gas taxes for anything other than transportation, which will give road projects a better chance at coming to fruition.
Additionally, voters in Maine approved a $100 million bond issue that will fund construction, reconstruction and rehabilitation of the state’s highways and bridges. According to a report from the Portland Press Herald, the state bond money will be matched with another $137 million in federal and other funds.
Texas’ capital city of Austin received permission from its voters to borrow $720 million over the next five years – which will be repaid through property taxes – for transportation projects in the city. According to the Austin American-Statesman, $101 million of the bond will be used for highway projects, including $46 million for Loop 360 around the western perimeter of the city.
Louisiana will also be looking to improve its roads after voters approved a new trust fund that can be spent on construction projects and roadwork, The Advocate reports. Once the trust fund reaches $5 billion, up to 10 percent of it can be used on road improvements, the report says.
Finally, Rhode Island will use $70 million to make improvements at the Port of Davisville in North Kingstown and the Port of Providence after voters approved the measure Tuesday. The Providence Journal says $50 million will be used at the Port of Davisville to modernize Pier 2, which was built in 1956 and is used for auto imports. The remaining $20 million, the report states, will be used to buy land and build new infrastructure to expand the Port of Providence’s capacity.