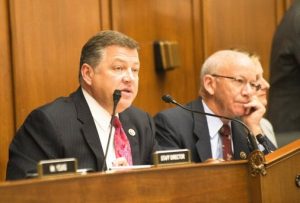 The House Transportation and Infrastructure Committee Thursday afternoon approved by a unanimous voice vote its version of a long-term highway bill, the Surface Transportation Reauthorization and Reform (STRR) Act of 2015 (H.R. 3763).
The committee termed the measure “a bipartisan, multi-year surface transportation bill to reauthorize and reform federal highway, transit, and highway safety programs” and described it as proposal that is “fiscally responsible, provides greater flexibility and more certainty for states and local governments to address their priorities, and accelerates project delivery.”
The STRAA ACT would authorize spending up to $325 billion on transportation projects over the next six years, including $261 billion dedicated to highways.
But instead of providing for six years’ worth of funding up front, the House bill will require Congress to pass separate legislation that would “unlock” additional funding after the first three years of funds are depleted.
By contrast, the long-term measure passed by the Senate back in July would fund infrastructure projects for three years and leave it up to the next Congress to fund the last three years covered.
Transportation and Infrastructure Committee Chairman Rep. Bill Shuster (R-PA) called the unanimous vote for the bill “a positive step forward for our nation’s transportation system and our economy.
“I look forward to House action on the bill and going to conference with the Senate as soon as possible.”
However, there’s another huge roadblock to surpass. Besides reconciling the House highway bill with the long-term Senate measure, the House Ways and Means Committee must come up with funding to cover the transportation investment laid out in the STRR Act.
More immediately though, because the current short-term patch authorizing spending on transportation runs out on Oct. 29, Congress has less than a week to approve yet another brief extension of the existing long-term highway bill – the one that was passed by both chambers way back in 2009.