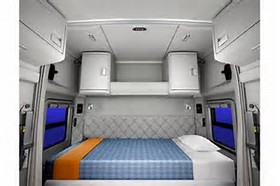 As Go By Truck News reported last week, the U.S. Department of Transportation was directed to conduct a study on the benefits of the 2 Hours of Service restart provisions. The study reported no net benefit to truckers and on Thursday the Federal Motor Carrier Safety Administration dropped the requirements.
From the study, conducted by the Office of Inspector General, “Congress and the motor carrier industry raised concerns about its unintended consequences, such as increased congestion during daytime traffic hours. In the act, Congress suspended FMCSA’s enforcement of the two aforementioned provisions of the 34-hour restart rule and required the Agency to conduct a study of the operational, safety, health, and fatigue impacts of the rule. We found that DOT’s study met the act’s requirements. We also concur with the Department’s conclusion that the study did not explicitly identify a net benefit from the use of the two suspended provisions on driver operations, safety, fatigue and health.”
After reviewing the results of the study, the FMCSA released the following notice:
NOTICE: The Consolidated and Further Continuing Appropriations Act of 2015 was enacted on December 16, 2014, suspending enforcement of requirements for use of the 34-hour restart, pending a study. Based on the findings from the CMV Driver Restart Study, the 34-hour restart rule in operational effect on June 30, 2013, is restored to full force and effect. The requirement for two off-duty periods of 1:00 a.m. to 5:00 a.m. in section 395.3(c) of the Agency’s hours-of-service rules will not be enforced, nor will the once-per-week limit on use of the restart in 395.3(d).
Source: Federal Motor Carrier Safety Administration