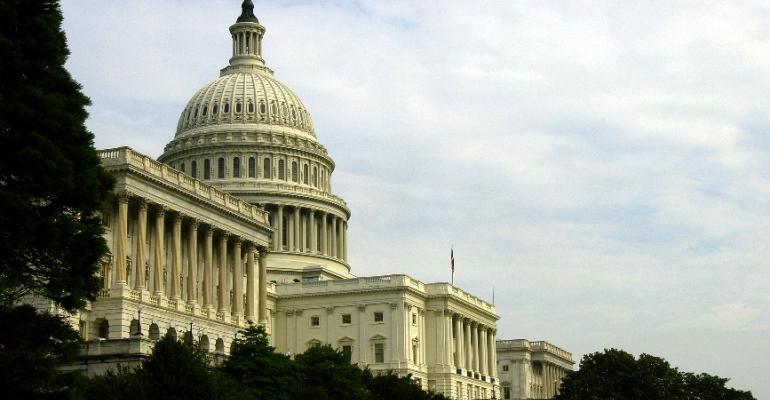 Bringing together five members of President Trump’s Cabinet before the Senate Committee on Commerce, Science, and Transportation illustrated there is urgency to improve the nation’s infrastructure.
The March 14 hearing, however, included little discussion of freight. Instead, it featured most Republicans touting efforts to streamline the permitting process, and numerous Democrats questioning whether the federal government has a large enough role under Trump’s proposal.
“This is not just another highway bill,” said Chairman John Thune (R-SD). “We will consider other infrastructure needs, such as rural broadband and water projects, and seek to break down barriers that are impeding the deployment of all types of infrastructure.”
Testifying at the hearing were Transportation Secretary Elaine Chao, Energy Secretary Rick Perry, Labor Secretary Alexander Acosta, Agriculture Secretary Sonny Perdue, and Commerce Secretary Wilbur Ross. They each offered support for Trump’s proposal to use $200 billion in federal funding to leverage at least $1.5 trillion in new investment over 10 years.
Chao said some studies show the United States requires an infrastructure investment of $4 trillion.
“We cannot address a challenge of this magnitude with federal resources alone, or by borrowing,” Chao said in her opening statement. “That approach will crowd out the capital markets, hindering economic growth and job creation. So the president’s plan allows the private sector to help in the building of our public infrastructure.”
Ranking member Bill Nelson (D-FL) said “we can’t toll our way out of this problem.” He suggested reversing a small percentage of the corporate tax cuts passed late last year could go directly toward infrastructure needs, and upgrading the 911 emergency call system.
“This is real money and it is completely paid for,” said Nelson, whose suggestion was opposed by Republicans on the panel.
Chao said tolls are not the only option, and the federal government was agnostic when it came to options local entities could choose to fund projects. Nelson noted the when private firms get involved they have to be reimbursed, which generally means tolls and other fees.
Perry, the former governor of Texas, was among those offering strong support for decisions being made far away from Washington.
“The president’s plan takes a partnership approach that recognizes the local need while also building with our national interests in mind,” he said. “It is based on the common-sense notion that government that is closest to the people is best suited to understand and meet their needs.”
Several senators from smaller states expressed concerns they would be able to attract outside investment, and whether uncertainty with the North American Free Trade Agreement or tariffs could threaten economic development. The secretaries downplayed these fears and expressed a commitment to working in a bipartisan manner with the committee to developed transformative infrastructure legislation.
Nelson also was critical of the administration’s reluctance to accept scientific data. He said science has helped to warn the people of hurricanes and was troubled by a sense of some people “refusing to understand science and to accept it.”