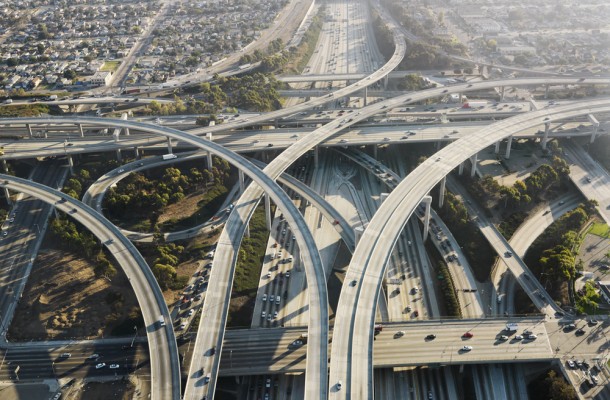 Political leaders and citizens agree: our nation’s transport infrastructure is crumbling. Our roads receive a “D” grade from the American Society of Civil Engineers (ASCE) and one in nine of the nation’s bridges are structurally deficient.
The trucking industry knows this as well as any, as our 3.5 million drivers travel 279 billion miles across these insufficient highways, bridges, and tunnels annually.
But poor infrastructure affects more than just our hardworking men and women on the road. Roughly 70 percent of the nation’s freight is moved by nearly 32 million trucks on the road, day in and day out — delivering the goods that our towns and cities need to thrive — from groceries and medicine, to retail goods, school supplies, and more.
In other words, failing infrastructure threatens to not only slow down trucking, but all of America in the process.
For this reason, Trucking Moves America Forward (TMAF) is proud to be an affiliate of Infrastructure Week once again this year. We join a diverse coalition of groups dedicated to rebuilding America’s roads, bridges, rails, ports, airports, pipes, power grid and more to support the cause and spread the message of this year’s theme, that it’s #TimeToBuild.
Consider road congestion, which is merely one of the symptoms of our increasingly inadequate infrastructure. It cost the trucking industry — which contributes $726.4 billion in revenue to the economy every year — almost $50 billion in wasted time and fuel last year alone, a cost that affects the entire economy. In fact, as several of the country’s lawmakers have noted, due to the conditions of our roadways, “American businesses pay $27 billion a year in extra freight transportation costs, increasing shipping delays and raising prices on everyday products.”
Additionally, the ASCE found that by 2020, this deteriorating infrastructure will cost the economy nearly 1 million jobs and hurt GDP growth by $1 trillion. That includes deteriorating pavement and bridge conditions that alone will cost our economy $58 billion per year, and the resulting highway congestion that will cost us more than a quarter billion dollars.
There’s no denying it’s time to invest and build. The trucking industry won’t sit idly when poor infrastructure puts our mission in jeopardy and prevents us from doing our jobs as safely and efficiently as possible. As long as we need to, TMAF will advocate strongly for infrastructure spending that improves the highway networks most critical to the movement of freight and interstate travel, while prioritizing the safety of the motoring public in the process.
Importantly, we’ll continue to call on our political leaders at the state and federal levels to work with us to close the nation’s infrastructure investment gap. Our hardworking drivers depend on structurally sound and safe roads to deliver America’s goods. Families, neighborhoods, hospitals, businesses and individuals like you and I — the entire American economy — are counting on it.
And the 7 million-plus workers in the professional trucking industry stand in agreement with all of Infrastructure Week’s affiliates and supporters by echoing a unified, clear message: it’s #TimeToBuild.