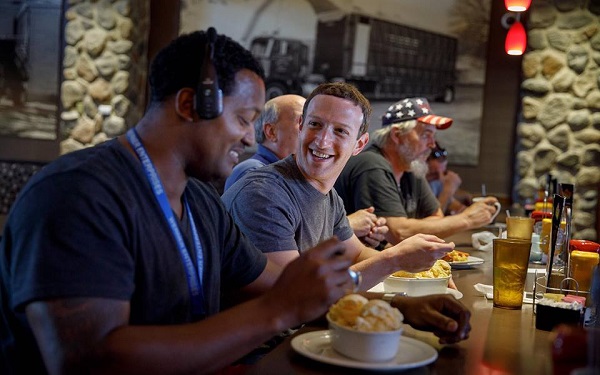 Facebook founder Mark Zuckerberg was hanging out with truckers last week at the Iowa 80 truck stop!
As part of his 2017 New Year’s resolution, Zuckerberg announced he was going on a tour of the United States as part of a challenge to meet people in every state.
“My work is about connecting the world and giving everyone a voice. I want to personally hear more of those voices this year,” Zuckerberg wrote in a Facebook post.
During his visit he asked truckers about their lives and what they found challenging. Maybe somewhat surprisingly, truckers told him they find cars on the road and how they drive to be a regular issue. “So next time you’re annoyed by a truck on the road, just know that they probably feel the same way about you,” he wrote in his Facebook post.
Here is Zuckerberg’s post in its entirety:

In Iowa, I stopped by one of the major truck stops. It’s like a small city where truckers on long trips can take a break, get something to eat, get a haircut, do laundry, get their truck washed — or their dog washed! — and even go to the dentist.

A few things stuck with me after spending time with some truckers:

Trucking is a unique lifestyle — that often involves your family.

One trucker I met put eight kids through college with the money he’s made on the road. He also had some strong views on the second amendment.

I met another trucker who drives from Chicago to Reno with his wife and three dogs every week. They take 12 hour shifts driving and sleeping in the bed in the cabin.

Another man I met spent 17 years in the military before becoming a trucker. His wife rides with him sometimes. She’s not a trucker, but she just wants to spend time together.

I asked the truckers what’s changed over the last few decades. When the truckers I met started driving, you logged your driving hours on pieces of paper. Now it’s electronic and automatic, which makes it harder to drive more hours than you’re supposed to. Some people said they want to work longer, but they feel like regulations are getting in the way of their freedom and doing what they want to do. It’s tough because those regulations try to keep people on the road safe.

I asked a number of truckers what they think about self-driving cars and trucks and what they think about the future. Everyone I met was skeptical self-driving trucks would replace jobs for different reasons. Some thought it would be impossible to pack all the sensors you need to deal with things like weather into trucks. Others thought computers could handle the interstate but not the last mile to the store. And some truckers think we’ll end up with something like autopilot on planes — with trucks driving themselves with people in the cab. From all the research I’ve seen, I’m confident we’ll solve these problems. But it’s interesting that people in the industry don’t believe this will happen soon.

Finally, I asked truckers what their biggest challenge was. Their answer: cars. So next time you’re annoyed by a truck on the road, just know that they probably feel the same way about you.