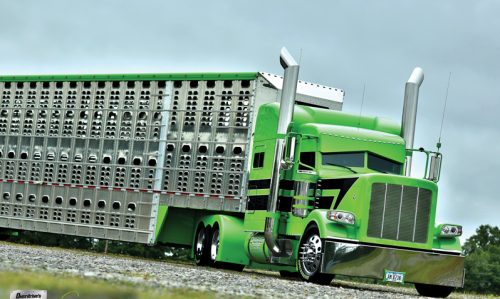 Truckers hauling agricultural products and livestock have received further reprieve from compliance with the U.S. DOT’s electronic logging device mandate. The Federal Motor Carrier Safety Administration announced Tuesday that such haulers will have until June 18 to adopt an ELD. They can continue to run on paper logs in the meantime.
Ag and livestock haulers had already secured a three-month compliance extension beyond the mandate’s December 18 compliance deadline, giving them until March 18 to comply. However, the agency decided to provide such truckers an additional 90 days to comply so it can “continue to work on outreach and communication with the ag community so they have the fullest understanding of the rule and regulations,” said FMCSA head of enforcement Joe DeLorenzo.
Drivers covered by the waiver include those who haul “any agricultural commodity, non-processed food, feed, fiber, or livestock,” according to the agency’s original December waiver. Livestock is defined as “…cattle, elk, reindeer, bison, horses, deer, sheep, goats, swine, poultry (including egg-producing poultry), fish used for food and other animals designated…that are part of a foundation herd or offspring.” The waivers apply to all drivers hauling the aforementioned loads, regardless of their distance traveled or whether they cross state lines.
The waiver does not alter hours of service regs for livestock and ag haulers.
The agency says it will formally publish the exemption extension in the Federal Register in the coming week. Drivers operating under the waiver must have a copy with them. The agency’s original waiver is available at this link.
The agency also said it will also issue in the coming months further guidance related to the 150 air-mile radius exemption already granted to agricultural haulers and guidance related to personal conveyance and ELDs.
The agency in December proposed nixing the requirement that a truck be unladen for it to be used in personal conveyance. The agency said the change is mostly targeted at straight truck drivers, who cannot drop their trailer and use their truck for personal use.
The agency in December also sought feedback from industry stakeholders about whether it should expand the already-existing HOS waiver for ag haulers, which exempts drivers hauling ag loads from keeping logs and adhering to hours of service regulations if they run within a 150-air-mile radius of their load’s point of origin. They agency floated in December the idea of changing that exemption to 150 miles from the driver’s final pickup, should they pick up partial loads at multiple locations, rather than their load’s origin.