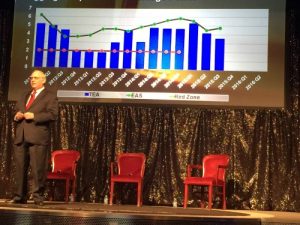 The odds of a recession in the U.S. during the first three quarters are low, according to Bob Dieli, president and founder of Lombard, Illinios-based RDLB, Inc.
Speaking this week at Heavy Duty Aftermarket Dialogue in Las Vegas, Dieli said he expects to see further growth in TEA — truckable economic activity — and that growth will be at a pace similar to that of 2015.
For the third quarter of 2015, the latest period for which data is available, Diele said TEA was at $10.6 trillion. Nearly half of that fit into the consumption category, with investments accounting for another 25%.
He also expects consumption to move ahead, reflecting the improved employment situation. Both spending on equipment and construction activity could be slowed by higher interest rates.
Noting that the phases of the business cycle include a period of expansion, a boom, a peak, a recession, a trough, recovery, and back to expansion, he said the U.S. economy is now in the fourth largest period of expansion as defined by the National Bureau of Economic Research.
Dieli said that the TEA outlook is based on where the economy as a whole is headed. Based on the normal phases of the business cycle, he said “we are getting in position for a boom in which the economy shows signs of instability.
Events in China, Brazil and Europe will impact how our economy performs, according to Dieli. The export market is the one place he expects “continued headwinds to inhibit growth. Events overseas will continue to be a major influence on both the course of aggregate economic growth and the decisions made by the Federal Reserve.” Exports make up 14% of TEA.
“I am very concerned that [exports] will be source of weakness,” he said, adding that it is normal for not all sectors of the economy to grow at the same pace.
Over the last year, he has seen significant improvement in state and local government spending. “State and local spending should provide a sustained boost,” he noted.