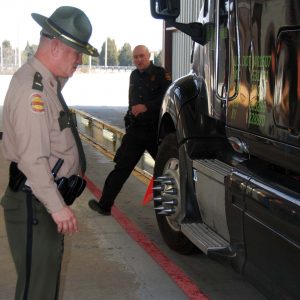 In some ways echoing drivers’ thoughts of late on regulatory complexity, the Commercial Vehicle Safety Alliance notes the burden being placed on roadside inspectors by the Federal Motor Carrier Safety Administration is becoming excessive, specifically because of the large number of hours and other exemptions being granted to drivers and carriers.
In a letter penned to FMCSA last week, CVSA Executive Director Collin B. Mooney said there were more than 20 exemption applications or renewal requests granted in 2015, including some for vehicle equipment, hours-of-service and more.
“Due to the amount of exemptions allowed by FMCSA in the past year, an excessive burden is being placed on inspectors to ensure all active exemptions are being followed properly,” Mooney said in the letter. “Furthermore, this puts an undue training burden on agencies that must be diligent in informing all inspectors of the new exemptions and ensuring they understand and apply the exemptions properly.”
FMCSA Spokesman Duane DeBruyne said the letter is under review.
Mooney went on to say that, with the allowance of such a large number of exemptions, “the likelihood of achieving a level of safety equivalent to, or greater than, the level that is expected by the current regulation is in jeopardy,” and that there is a possibility that “roadside inspectors will no longer accurately enforce the regulations, or may stop enforcing regulations all together.”
Mooney said CVSA doesn’t object to the exemptions on an individual basis, but added that exemptions “complicate the enforcement process, causing confusion and inconsistency in enforcement,” thus undermining uniformity in enforcement.
Mooney suggested that FMCSA removing or limiting exemptions would eliminate the confusion and inconsistency in enforcement, which, he said, would benefit both the industry and the enforcement community.”