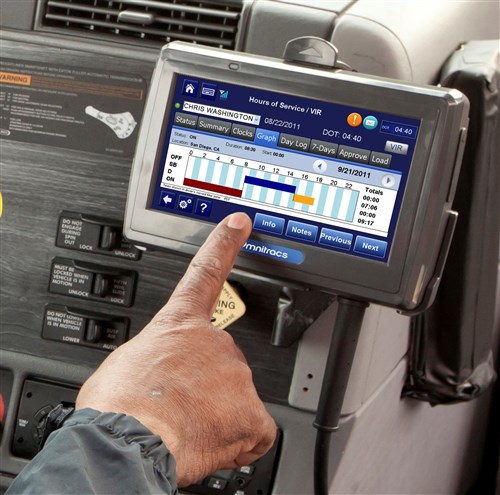 After hearing oral arguments September 13, the Seventh Circuit Court of Appeals voted unanimously today to uphold the Federal Motor Carrier Safety Administration’s final rule mandating electronic logging devices or ELDs in commercial trucks. The rule will now go into effect on December 18, 2017.
The ELD mandate affects an estimated 3 million interstate drivers of vehicles manufactured after model year 2000.
The Owner-Operator Independent Drivers Association, which had opposed the mandate in March, saying among other things that it violated 4th Amendment rights against unreasonable search and seizure, had hoped its legal challenge would result in the rule being vacated a second time.
The first such time it was vacated, appeals judges agreed with OOIDA that the rule didn’t sufficiently address the issue of the devices being used to harass drivers. This time around, however, judges thought that area, as well as other objections, were covered sufficiently by the rule.
In response to the ruling, OOIDA President and CEO Jim Johnston told The Trucker:
“We are disappointed and strongly disagree with the court’s ruling. Because this issue is of vital importance to our members and all small business truckers, we are reviewing our next steps to continue our challenge against this regulation.”
The American Trucking Associations, whose Deputy General Counsel Rich Pianka had been pretty confident that the judges wouldn’t overturn the rule, expressed pleasure at the outcome, saying through a spokesman:
“ATA is pleased that the court has cleared the way for this important regulation and we look forward to its implementation.”
The petitioners had five arguments for vacating the 2015 final rule: ELDs will not record enough information automatically and thus didn’t comply with Congress’ mandate; the rule fails to protect drivers sufficiently from harassment; the rule’s benefits will not outweigh its costs; the rule fails to protect the confidentiality of personal data collected by ELDs; and the rule violates the Fourth Amendment’s prohibition against unreasonable searches and seizures.
The judges’ ruling said the petitioners assumed that the rule “hid” all-encompassing surveillance of CMV drivers in the word “automatically” [record] and that they disagreed with that interpretation. They also disagreed with OOIDA that to meet Congress’ mandate, ELDs must be able to tell when a driver went from off-duty to on-duty non driving.
Second, they held that the mandate sufficiently protects drivers from harassment as defined by Congress. The judges also disagreed with OOIDA’s contention that ELDs wouldn’t help with Hours of Service and added that FMCSA wasn’t required to include a cost-benefit analysis with this rule.
On the issue of protecting confidentiality, the judges wrote that the fact that drivers and carriers are tasked with maintaining and storing the information themselves and that the mandate directs the information to be stored as to protect drivers’ confidentiality in a manner consistent with sound business practices, made it perfectly sufficient.
Finally, the judges called OOIDA’s arguments as to unreasonable searches and seizures, “unpersuasive.”
OOIDA still has the option of appealing the ruling.