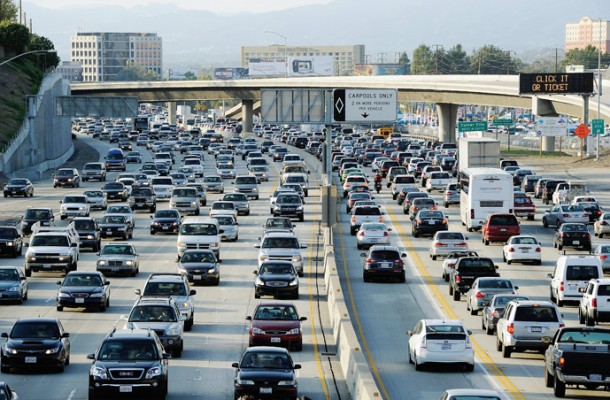 Traffic congestion on the U.S. National Highway System added over $63.4 billion in operational costs to the trucking industry in 2015, according to research released yesterday by the American Transportation Research Institute. Utilizing a variety of data sources including its unique truck GPS database, ATRI calculated delay on the NHS totaling more than 996 million hours of lost productivity, which equates to 362,243 commercial truck drivers sitting idle for a working year.
ATRI’s analysis also documented the states, metropolitan areas, and counties that were most impacted by these delays and subsequent cost increases. The top 10 states experienced costs of over $2 billion each, with Florida and Texas leading with over $5 billion each.
As expected, traffic congestion tended to be most severe in urban areas, with 88 percent of the congestion costs concentrated on only 17 percent of the network mileage, and 91 percent of the total congestion cost occurring in metropolitan areas. This concentration of congestion has been well-documented in ongoing work by ATRI which annually identifies the worst truck bottlenecks in the U.S.
The analysis also demonstrates the impact of congestion costs on a per-truck basis, with an average increased cost of $22,676 for trucks that travel 100,000 miles annually.
As part of this analysis, ATRI has updated its congestion cost database with 2015 data to provide granular cost information to transportation planning officials on the hours of delay and associated cost by major jurisdiction type and road level.
“Congestion-related costs continue to rise and impact our supply chains. A five minute delay for each UPS vehicle, every day, costs UPS $105 million annually in additional operating costs. ATRI’s report quantifies this drain on the economy which must be addressed through targeted infrastructure investments,” said Rich McArdle, President of UPS Freight.
You can request a free copy of the report here.
Source: American Transportation Research Institute