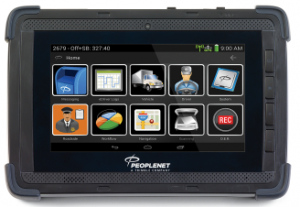 Tomorrow’s trucks will be equipped for wireless remote updating of spec’s for specific operating conditions, such as crossing mountains, speakers said at a trucking conference Aug. 27.
Further developments in that area, known as “parameterization,” as well as remote diagnostics and autonomous trucks, will come incrementally, building upon existing technologies, said speakers at the Commercial Vehicle Outlook conference in Dallas.
Parameterization’s ability to reset horsepower, speed governing and other engine specs for special circumstances “is going to be the next big opportunity,” said Chris Hines, executive vice president of Zonar. “If I’m a fleet and I’ve got a light-weight load and it’s going over the Rocky Mountains, I should be able to set a truck for the location.”
The fleet will have to manage whether a driver has the ability to make such adjustments, or whether that would be limited to someone at the home office. Drivers would like that flexibility in certain situations, for example: “If you need more horsepower, you can get more horsepower for that load.”
For remote updates of firmware for safety-related systems, which could have more critical results, “We have to be a lot more careful,” said Stephen Hampson, president and general manager of Meritor Wabco Vehicle Control Systems. “I see that being a little bit further out.” The payback for some fleets regarding safety improvements is eight or nine months, he said. “That’s why they’re spec’ing more of the systems,” Hampson said.
As for fuel efficiency improvements, “You see a lot of interest in platooning right now because the payback is pretty obvious,” he said. Platooning also raises the question of whether hours of service regulations should be changed to treat a driver’s on-duty time differently if he’s in a platoon and getting a form of rest.
Hampson said safety system communications for trucks and other vehicles are falling into three categories: vehicle to vehicle; vehicle to the infrastructure; and the vehicle receiving information from what is around its immediate vicinity, such as other vehicles and pedestrians. While the major focus for gathering data for warnings and the triggering of safety systems is on what’s in front of the truck, other systems now also deal with what’s beside the truck and what’s behind it. Increasing use of video has furthered these advances.