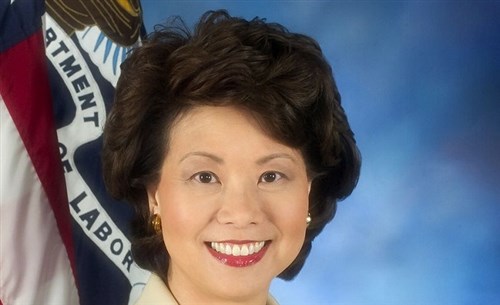 and Transportation Officials (AASHTO) that important regulatory and policy changes are under way at DOT to help deliver infrastructure projects faster and in a more cost-effective manner.

Chao spoke at AASHTO’s annual meeting here where she also told state DOT officials that Congress will probably not begin to address the Trump administration’s long-awaited infrastructure investment ideas until after lawmakers deal with tax reform.

As for the regulatory and policy changes, “The Department of Transportation is committed to identifying ways to eliminate unnecessary paperwork and bureaucracy that will save states time, money and reduce burdensome compliance costs,” Chao said.

Among the regulatory reform efforts Secretary Chao cited were that:

The speech comes one month after Chao joined President Donald J. Trump as he signed an executive order that is designed to streamline the permitting and review processes for infrastructure projects.
The executive order, entitled, “Establishing Discipline and Accountability in the Environmental Review and Permitting Process for Infrastructure Projects,” streamlines our environmental review system and removes current roadblocks in order to ensure a faster and more efficient permitting process for America’s major infrastructure projects, Chao said.

While various administration officials have previously said they want Congress to tackle infrastructure after tax legislation, Trump officials had earlier said they expected to unveil many parts of their investment proposal by now.

However, the industry is still waiting for key details on how the administration would award funds for projects, and how it would pay for them. The administration so far has said it would rely heavily on private investment and state or local funding to cover most of the cost of a 10-year, $1 trillion investment plan that would use only $200 billion in direct federal funds.
Chao said that the administration is still working on its plan. “The principles have been announced, and the details are currently being worked out,” she told the AASHTO group.
President Donald J. Trump, meanwhile, set off reports that he may be shifting on a key element.
While administration officials have repeatedly said they expect to reward public-private partnerships more aggressively to woo more private investment in projects, Trump said in a meeting on tax reform with a bipartisan delegation from the House Ways and Means Committee reportedly that such P3s are “more trouble than they’re worth.”