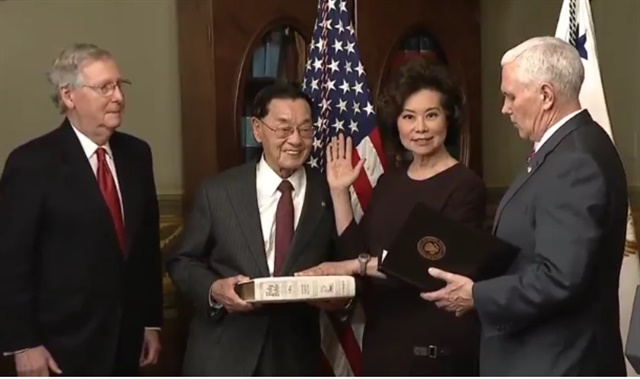 As expected, Elaine Chao was easily confirmed in largely bipartisan fashion on Jan. 31 as Secretary of Transportation by the U.S. Senate. The final roll call tally was 93 for and 6 against. In addition, Senate Majority Leader Mitch McConnell (R-KY), who is married to Chao, voted “present.”
Secretary Chao has stated that one of her top priorities will be cooperating with Congress to enact the trillion-dollar infrastructure investment plan that has been floated by President-elect Trump since right after the election.
Speaking at her Senate confirmation hearing earlier in January, Chao emphasized the “significant difference between traditional program funding and other innovative financing tools, such as public-private partnerships.” She said getting private capital flowing into infrastructure projects will require “incentivizing” equity firms, pension funds, and endowments to invest in “a bold new vision” for building highways and other infrastructure.
In addition, Chao pledged in that hearing to keep safety a “primary objective” for DOT on her watch. She has also asserted that regulatory decisions should be “based on sound science with solid underlying data.”
Chao is no stranger to the power elite in Washington. She served as secretary of labor throughout both terms of President George W. Bush. Her first major executive appointment was deputy secretary of transportation under President George H.W. Bush.
“Secretary Chao has a long and distinguished track record, from her time as Secretary of Labor where I got to know her best and her service as Deputy Transportation Secretary as well as with the United Way and Peace Corps,” said Chris Spear, president and CEO of the American Trucking Associations, after the confirmation vote.
“Wherever she has gone,” he added, “Secretary Chao has demonstrated the kind of leadership and vision we need to address our nation’s pressing transportation issues and we look forward to quickly getting to work with her.”
ATA Chairman Kevin Burch, president of Jet Express Inc. added that trucking is “excited to begin working with Secretary Chao and eager to join with her in pushing to improve the safety and efficiency of our nation’s highways.”
House Transportation and Infrastructure Committee Chairman Bill Shuster (R-PA) also congratulated the newest member of the Trump cabinet.
“I look forward to getting to work with her, the new administration, and my colleagues in Congress on the many issues before the Committee this year,” Shuster said. “We have a tremendous opportunity to improve our transportation systems, reduce regulatory burdens, encourage innovation and private-public partnerships, strengthen our competitiveness, and build a 21st century infrastructure for America.”
Offering well wishes as well was the Intelligent Transportation Society of America, which emphasized in a congratulatory letter that it “stands ready to work with Secretary Chao and her department to accelerate the widespread deployment of intelligent, transformational transportation systems.”
In the letter, ITS America President and CEO Regina Hopper told Chao that “Our members would like to work closely with you to build a transportation infrastructure that is the technological envy of the world—a national system that drives economic growth, enhances global competitiveness, advances safety, and improves mobility.”