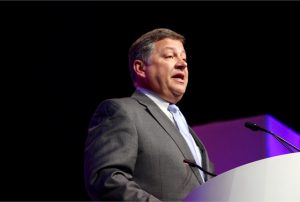 PHILADELPHIA – The Chairman of the House Transportation and Infrastructure Committee laid out the long and winding road ahead for passage of a multi-year highway bill by both chambers of Congress in his address here on Oct. 19 to the American Trucking Associations’ Management Conference & Exhibition.
“A priority for me as [T&I Committee] chairman has been getting a long-term highway bill passed,” said Rep. Bill Shuster (R-PA), whose committee will mark up just such a House bill on Oct. 22.
He said a driving force in putting together the new $325-billion, six-year funding bill—officially the Surface Transportation Reauthorization and Reform Act of 2015 (STAA)— has been “the partnering” that has occurred with industry stakeholders to ensure that reforms of safety regulations sought by trucking interests will be addressed in the massive package.
Shuster also praised the bipartisan efforts of committee members that “found the common ground to move forward with this bill.” In particular, he saluted Rep. Peter DeFazio D-OR), the Ranking Member of T&I, for “being a good partner, even if we don’t always see eye to eye.”
Pointing out that the multi-year bill will “provide certainty of funding” for planning highway projects, Shuster assured the audience that the House Ways and Means Committee has been “working diligently” in tandem behind the scenes to come up with six years of funding for the programs the T&I bill will authorize.
As for the sausage-making yet to come, he stated that Ways and Means Chairman Rep. “Paul Ryan [R-WI] and I thought it best to put this bill out there and later put pressure on the Senate in conference [to iron out what’s different from the Senate highway bill]. We’ll formally introduce the bill this week to the [T&I] committee this week and get it to the floor of the House next week.”
All that being said, Shuster quickly admitted that given that the current spending patch for transportation funding expires on Oct. 29, “most certainly we will have to pass another short-term extension. Butt that will give us more time to get our long-term bill through the conference process with the Senate.”
Shuster added that, yes, there are differences between the new House and the existing Senate highway bills— adding that there are “some things I like in theirs and some I do not.”
He also called on trucking and other transportation stakeholders “to keep pushing” to get a long-term bill done and for one that will “improve our infrastructure with the resources we have; that will give the states more flexibility in project planning; give [business] the freedom to operate without undue regulation, and improve truck and bus safety.”