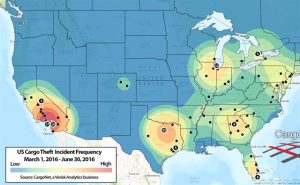 A new report reveals the number of reported cargo thefts in the U.S. fell during the second quarter of the year compared to the same period in 2015, but the average value of the heists increased, according to the cargo theft prevention and recovery service CargoNet.
Its command center logged 297 reports of cargo theft, identity theft, vehicle theft and other criminal intelligence matters relating to the United States and Canadian supply chain. Of these incidents, 192 involved thefts of cargo, down 15% compared to a year earlier.
An estimated $39 million in cargo was stolen in second-quarter 2016, up $1.3 million from 2015’s second quarter. Sixty-one percent of incidents had a loss value recorded, averaging $330,339, up $63,243 from cargo theft incidents reported in second-quarter 2015.
Also in second-quarter 2016, CargoNet recorded eight cargo theft incidents worth $1 million or more and one was valued at an estimated $8 million.
During the most recent quarter, $14.6 million in electronics items were stolen in cargo thefts, the most costly category– but not the most frequently stolen commodity. Food and beverage items were stolen most often, though losses in the category decreased 17% year-over-year, totaling $3.81 million.
Warehouse or distribution center locations were the most common location for cargo theft, with 53 thefts. Unsecured yards were the next most common with 29 cargo thefts, growing 45% year-over-year.
Fifty-nine percent of unsecured yard thefts occurred in Texas and California, though the Lone Star State had a larger share. In contrast, cargo thefts were down 26% at truck stops and were 36% lower at parking lots
Many of the top states showed a decrease or little change in reported cargo theft when comparing the second quarters of 2015 and 2016. However, cargo theft incidents in California climbed 86%, from 37 reported incidents to 68 reported incidents, totaling $17.4 million in losses. Nineteen fictitious pickups were reported also in the state, eight more than in second-quarter 2015.
Across the United States and Canada, 139 trailers and 124 tractors were reported stolen in second-quarter 2016, down from 173 trailers and 143 tractors in second-quarter 2015.