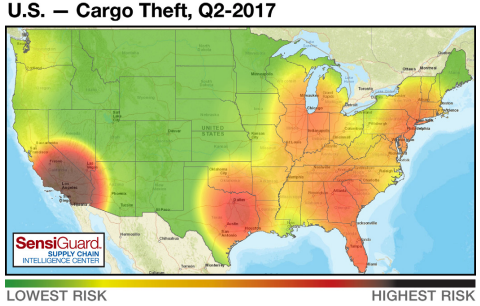 The number of cargo thefts in 2017’s second quarter was down from the first quarter of the year, while the value of cargo thefts was up, according to cargo theft recording firm SensiGuard.
The firm recorded 126 cargo thefts in the United States during the second quarter, which is a 10 percent decrease from the first quarter. The $140,162 average loss value of those thefts was a 12 percent increase when compared to the first quarter of the year. Compared to 2016’s second quarter, thefts were down 28 percent in volume and 13 percent in value, the firm adds.
SensiGuard’s data shows that food and drinks were the most-stolen products during the quarter, accounting for 17 percent of total thefts. Home and garden products and electronics were the second- and third-most stolen items at 16 percent and 13 percent, respectively.
Broken down by state, California had the most cargo theft incidents during the quarter, accounting for 29 percent of the nation’s thefts. This is a 28 percent decline from the first quarter, SensiGuard reports. Texas (15 percent), Tennessee (12 percent), Florida (9 percent) and Georgia (4 percent) rounded out the top five states for cargo thefts in the quarter.
The majority of cargo thefts (74 percent) involved the theft of a full truckload, according to SensiGuard’s quarterly report.