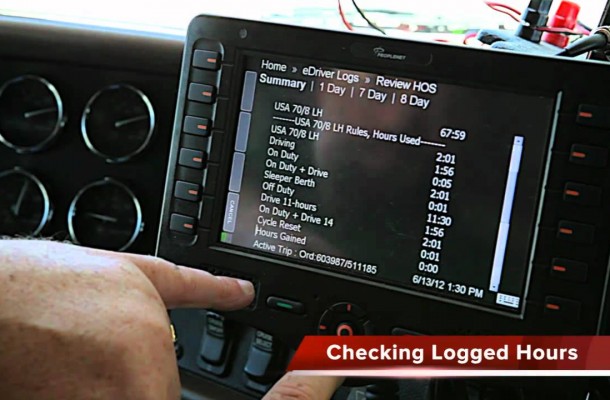 The bill by U.S. Representative Brian Babin that would delay implementation and enforcement of the electronic logging device mandate scheduled to go into effect on December 18 failed to pass in the House of Representatives.
The American Trucking Associations expressed their support of the result.
“ATA has supported, and will support, this important regulation,” said ATA President and CEO Chris Spear. “Congress has now voted a fourth time to move forward with electronic logging of the existing hours of service information required for decades. Make no mistake, the time for debate about electronic logging is over, and we’re pleased that Congress has rejected this ill-conceived effort to delay their implementation.
“For a decade, the Federal Motor Carrier Safety Administration has repeatedly spoken, the Courts have spoken, law enforcement has spoken, the industry has spoken and Congress has spoken in favor of the benefits of electronic logging devices,” he said, “all the while, opponents of electronic logging have delayed, dissembled and deceived about this technology. This vote should end what is left of this debate so our industry can carry on with the business of complying with this regulation.”
ATA Executive Vice President of Advocacy Bill Sullivan said “This vote is important. Complying with existing laws will make all who share the roads safer, and ATA will continue to work with FMCSA, carriers, drivers, and law enforcement to ensure smooth implementation of this bipartisan effort on schedule in December. We commend the leadership of Representative Rick Crawford and bipartisan champions in the House who support compliance with existing laws and rules.”
The Owner-Operator Independent Drivers Association disagreed with the vote but still thanks those members of the U.S. House of Representatives that showed support for certain trucking-related amendments to H.R. 3354, the Make America Secure and Prosperous Appropriations Act.
There were three amendments passed by voice vote that the Association supported, however, OOIDA remains disappointed that an amendment to delay the electronic logging device mandate did not pass.
Two of the three amendments that passed would prevent federal funding being used to toll certain interstates in Washington, Oregon and Pennsylvania. The Association contends that tolling decreases overall highway safety by diverting traffic and is not the solution to infrastructure needs.
The third amendment passed would prevent the use of federal funds to finalize a notice of proposed rulemaking to require speed limiting devices on trucks. OOIDA strongly opposes efforts to mandate speed limiters.
“We thank Representatives Jaime Herrera-Beutler, Glenn Thompson and Mike Kelly for their efforts in getting the tolling related amendments passed,” said Todd Spencer, executive vice president of OOIDA.
“We also want to thank Representatives Scott Perry, Doug LaMalfa and Mark Meadows for their work on the speed limiter issue.”
Regarding the ELD mandate delay, OOIDA thanks Representative Brian Babin for his support of professional truck drivers.
“The concerns raised by us, by Congress and industry stakeholders have not changed. There are too many unanswered questions about the technical specifications and enforcement guidelines of the mandate,” said Spencer. “This includes issues related to enforcement, connectivity, data transfers, cybersecurity vulnerabilities, and many other legitimate real world concerns.”
“The agency refuses to certify any ELD as compliant with the rule, thus leaving consumers with no idea if a device they purchase is indeed compliant,” said Spencer.
Spencer said that the Association encourages OOIDA members to get involved in its “Knock Out Bad Regs” campaign and will continue to communicate with Congress and the Administration about these and other issues.
Source: Owner-Operator Independent Drivers Association, American Trucking Associations